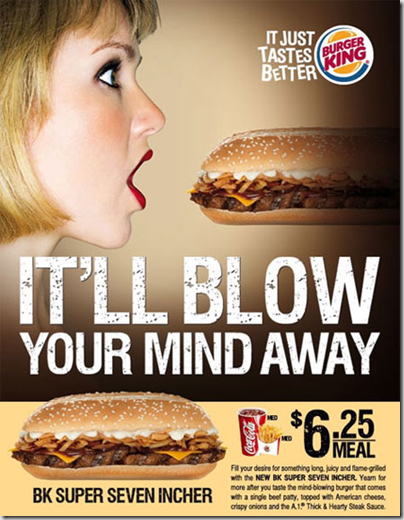 It just tastes better eh Burger King?   What would taste better is a sandwich that is not promoted by the devaluation of women.  Who exactly decided that this was a good idea?  I suppose we should be thankful that they didn’t smother her face with mayonnaise.

I thought after the square butt commercial, in which they showed little girls shaking their behinds for love of their artery clogging meals, Burger King would sink no lower but apparently the opportunity to  simualte a woman performing a blow job was irresistible. Burger King may want to give me seven inches but they certainly won’t be receiving my seven dollars.

These kind of images have become normalized because we find reducing women to parts to be acceptable.  I wonder how many young women will walk past this advertisement totally unaware of the insidious message that they are consuming? Nothing exists outside of discourse and therefore we cannot afford to excuse this as just a poorly formatted ad, when it will be used to support male hegemony. Burger King certainly does not value women and therefore they don’t deserve to profit from our few disposable dollars.