Classified Ad Calls For The Assassination Of Obama

Barack Obama  has been president for less than 6 months.  He has not lied the country into an illegal war, approved the torture of so-called “enemy combatants”, allowed the economy to tank, or earned the disrespect of global leaders.  He did not use the Supreme Court to steal his election; he became president the old fashioned way, one vote at a time.

Since making sure that Bush got on the plane back to Texas, Obama has been hard at work to rebuild the nation that 8 years of conservative management has made almost unrecognizable.  He is not a super man and therefore he will make mistakes but if we are to be honest, he is certainly better than his predecessor who will go down as one of the worst presidents in HISTORY.  Is it any wonder that his library will be at Southern Methodist University?

Despite the glaring hypocrisy and out right lies of the Bush administration, it is the color of Obamas skin that is somehow deemed threatening.  Being Black and president was enough to spur someone to purchase an ad in The Warren Times Observer on Thursday  calling for his assassination.

"May Obama follow in the steps of Lincoln, Garfield, McKinley and Kennedy!"

Somehow the person who accepted the ad did not see the connection between the four assassinated presidents and a potential threat to Obama’s life.  Gee if only Bush had not trimmed so much from education, this employee might have known their history. The newspaper has issued ad apology and turned over all of the necessary information to the police and the secret service.

Very early on in the campaign the Obama family received secret service protection because of the high rates of threats that he has experienced.  When he got out of the car to walk on inauguration day many held their breathe for fear that their worst nightmares might be realized.

Since he has settled into office there has been a rise in a white supremacist hate groups.  So called conservative commentators have laced their rhetoric with obvious racism thus inflaming an already racially divided population.  Obama has tried to construct himself as the uniter but in fact his presidency has revealed to many for the first time just how divided people of color are from Whites.

The secret service cannot take threats against him lightly.  Malcolm X, JFK, MLK and RFK prove that change or forward thinking politics are not readily acceptable in the United States.  Despite the long years since these men passed into history through  violence, the social discourse has remained virtually static.  Any black man that is “overly successful”, who refuses to imbibe the bitter wine of internalized racism (See uncle Clarence Thomas) is deemed a threat to white hegemony.  Whiteness awaits in fear the mass uprising of Blacks now that we supposedly have our neo-Moses and yet our opinion of him is far from this simplistic. 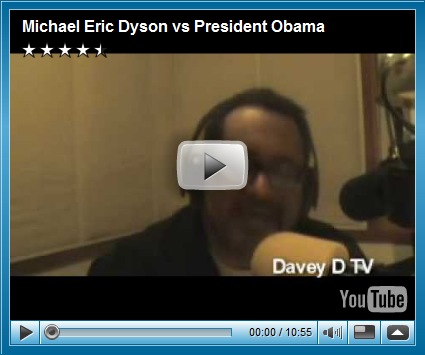 At the state of the Black union, Tavis Smiley repeatedly called for African Americans to hold Barack Obama accountable. Dyson is not alone in expressing frustration with the lack of attention to issues that are specifically African American.  Though he was one of the first prominent Black leader to publicly support him, Dyson realizes that for Obama to remain electable he must give the the appearance of moderation in terms of race issues.

Whiteness fears a loss of power and POC are still waiting for a seat at the table.  Though Obama won his historic election by attempting to be race neutral, the only way to solve the divide is to discuss the issue head on.  The United States is not post racial and despite the liberal quoting of the words of MLK, it is far from his dream.