Feminism: The White Women Are Chatting 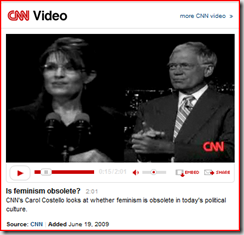 For some reason I cannot embed this video, so please click the image to view it over at Feministing. Normally Jessica Valenti appearing on CNN would not cause me to watch the video, however when it was suggested that feminism may be obsolete I was curious to see which women this little segment involved.  Can anyone guess what I was to discover?  That’s right, white women were busy debating whether or not feminism has a role.  The women held up as feminist icons were none other than Hillary Clinton and Angelina Jolie.  Certainly no woman of color could accurately represent feminism, we seem to be fit only to babysit while famous feminists rush off to seminars to discuss their marginalization.

ERASSURE, ERRASURE, ERRASURE.  Though one could argue that this is because of the medias fixation on white women as representative of feminism, I believe it is a symptom of feminist leadership historically being the preserve of white women of class privilege.  bell hooks advocates feminism and could have argued her position as succinctly as Valenti and yet she is often only called upon when there is an intersection with race as though women’s rights on its own is of no value to women of color.   Not to worry, in their writings feminists are often quick to lean on the work of women of color, it is only attributing our work properly that is an issue.

When discussions like this occur in which women of color are notably absent, it simply reifies the racism that continues to plague modern feminist organizing.  Valenti who I am sure was more than pleased with the media attention did not even bother to critique this story.  Why would she care that WOC are being excluded as long as she is being highlighted?

If one looks even deeper, the absence of lesbian women, trans women, poor women, and disabled women further limits what constitutes a supposedly feminist dialogue.  Apparently, the real issue is that upper class white women like Sarah Palin may not feel welcome in feminist circles but throwing countless women under the bus is not worthy of conversation.   Who the hell elected these women to speak on behalf of women like me?  How is it that despite the clear acknowledgement that the monolithic woman does not exist, heterosexual, cisgendered, able bodied , white women continue to not only represent feminism but are understood to embody all of its core values and ambitions? The answer simply put is privilege.

It is privilege that maintains the hegemony of white women in feminist discourse and it is privilege that causes the failure to acknowledge how damaging this is.  I began my womans activism as a feminist and it is only because of the continued erasure of several types of women that it became clear to me that feminism is not about justice or equality but the elevation of white women in relation to white men.  Feminism is no more relevant to a marginalized body than training wheels on a bike would be to a fly.  When these feminists demand vagina based solidarity, they need look no further than their own actions to understand why marginalized women increasingly say thanks but no thanks.  How’s that for a quick hit?