For The GOP Michelle Obama Is A Gorilla 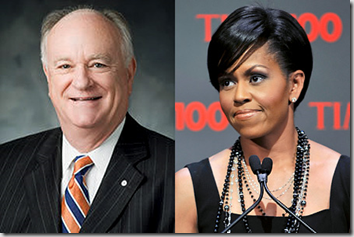 Since the election campaign Michelle Obama has come under attack by the GOP.  Despite wanting to paint themselves as racially diverse, Michelle has repeatedly been the target of what can be called nothing less than virulent racism.

A gorilla escaped from a zoo in Columbia to which Rusty DePass of South Carolina commented on his facebook page, “I'm sure it's just one of Michelle's ancestors - probably harmless."   When confronted about his clearly offensive commentary he responded by stating, “I am as sorry as I can be if I offended anyone. The comment was clearly in jest."  (emphasis mine)

Isn’t he just funny ha ha ha.  Why aren’t we all amused that a white men felt that it was appropriate to refer to the first African American first lady as a gorilla? He absolutely meant to be offensive as there is no other way to interpret this kind of commentary.   Apologizing after the fact does not remove the offense, or intentional nature with which DePass acted.

Anyone want to jump in and tell me that I am being to sensitive, angry, or emotional, considering the fact that we are after all in a post racial world?  How many of these attacks are POC going to have to undergo by those who feel threatened by change?  Time after time offensive language of this nature is used and we are expected to calmly turn the other cheek.

One of the things that white liberal supporters love about Obama is the fact that he never displays anger at this sort of commentary.  They love the idea of the “noble negro,” standing up after an assault and displaying above human restraint to their commentary.  This sort of behaviour is the model that we have been presented as acceptable, while anyone who displays rage at this behaviour is quickly demonized.   A slave was not allowed to make eye contact with a white man for a reason…whiteness has always feared our anger because it knows that it is the result of its hatred, and criminality.  As long as we are kept pliant and accepting of our own abuse, whiteness can feel comfortable in its privilege and racism.

I for one refuse to accept the apology of this clearly racist troll.  His actions were purposeful and meant to demean a woman that is clearly out of his league.  The fact that he even suggested that his commentary was meant in jest reveals just how little regard he has not only for Michelle Obama but for all people of color.   I won’t bother saying that his actions were racist, I will just be direct and say that he is a racist.  In  DePass you have the perfect example of power + prejudice….anyone still find the definition obscure?