For The National Review Sotomayor Is The Wise Latina Buddhist 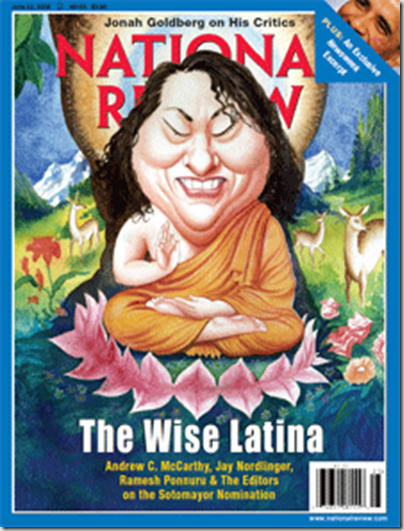 Okay, this latest image sent my WTF meter right off.  Seriously, how much longer are white men going to display their ignorance and hatred to promote their undeserved privilege?  It started with Sotomayor the piñata because apparently the fact that she is Puerto Rican and not Mexican is irrelevant. Now we have Sotomayor the Buddhist.  When it comes to creating WOC as “other” any social construction will do, as our cultures and religions clearly have no individualized identity.

Sotomayor is Catholic and Puerto Rican, how hard is it to recognize these two basic facts?  Not only is this image offensive to WOC, it is offensive to all Buddhists because their religion is being reduced once again to the “all knowing Asian” stereotype that whiteness loves to lean on.  You will note that even though people around the globe practice Buddhism, this caricature has slanted eyes so that the viewer is sure to recognize that the artist (and I use that term loosely) is reifying  that mysticism and or enlightenment are the preserve of those “brainy yellow people.”  Buddhists certainly don’t move through the world, holding down jobs and interacting with others; no they are far to busy contemplating the nothingness of being in mountain ranges with hard to pronounce names.

With this latest graphic the assaults on Sotomayor have truly reached the level of idiotic, sexist and racist.  In appealing to the irrational fear of white men that they are being supplanted, these artists have succeeded in creating a monolithic “other”.  It does not matter what ones achievements, education, or political position is if your body represents that of an “other”.  It panics these men of privilege that a Latina woman of humble beginnings could possibly have a different perspective or a line of thought that is more comprehensive due to a different life experience.

The very normalization of whiteness is what allows these kinds of images to exist.  These cartoons scream DIFFERNT, DIFFERENT, DIFFERENT…without acknowledging that the issue is not really difference but the value that has been applied to difference.  As Sotomayor goes through the confirmation process we will probably see more attacks of this nature.  Though whiteness is under no great attack from invading Puerto Rican women seeking to rule, the idea that  one could possibly sit on what has been commonly a throne to white men is threatening because it suggests that white men do not have a monopoly on intelligence.