I remember when I first told the unhusband that I was pregnant.  He went red from the center of his chest to the last hair on his head.  Today I am sure that he would tell you that panic was what he felt.   His very first words to Destruction were, “Oh my God, I have a son.  I love him so much.  Is it okay if I kiss him.”  Destruction wasn’t even five minutes old and already he was safely in the arms of the man that would love him the most and be his biggest influence.

As a first time mother with no experience with children, I was over protective to say the least but somehow the two of them moved around my fussing to create their own way of doing things.  They have their own secrets and have managed to get into trouble together more times than I could tell you. 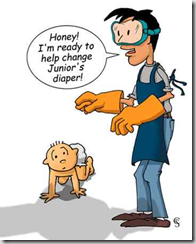 The unhusband has been my partner diaper for diaper and is even better at singing lullabies, though this could have a great deal to do with the fact that I sound like Fred Flintstone when I try to sing.  He has never shied away from the gross side of parenting and is very quick to laugh at the silly antics the boys get up to.

From school pageants, to baseball games, anything that the boys have displayed interest in, he has been quick to support.   For the unhusband life is all about family – and that means the boys and I.  Even when Mayhem is whirling like a diverish intent on using his father like a human jungle gym, the unhusband will simply protect his vitals and submit to the torture. He has been puked on, pooped on, peed on and head butted.   He has broken fingers, tripped on toys, and stepped on lego (you know that hurts like hell) but for all of the frustration, I know that a day without his boys would not be the same for him.

We often talk about the future and each conversation is laced with visions of the beautiful memories that we will create together as a family. In years to come there will be much laughter, a few tears and a lot of burnt dinners but none of it would be the same if we didn’t have the good fortune to have him in our lives filling it with love and devotion.

Happy Fathers Day darling, and Happy Fathers Day to all the men out there who are doing their part.  Though you don’t get the acknowledgement that you deserve, I feel that it is important on this day to say that though we could raise our children alone, I for one am glad I don’t have to.