Justice Is Blind Unless You Are Latino

How many times have we been told that justice is blind?  She supposedly sees neither race, class or gender and yet there are repeated incidents in which the lives of people of color are judged to be insignificant.

An eighteen year old Ohio male received a ten day sentence, after pleading no contest to ethnic intimidation in juvenile court. He allegedly tied a noose around the neck of Robert Cantu, tied the rope to a car and then dragged him around a parking lot while screaming ethnic slurs.  Cantu claims to have been saved by a bystander before his assailants could complete their threat to hang him.  The Cantu family now has plans to sue the city of Columbus, which oddly enough was dubbed the The Most Liveable City in 1994. 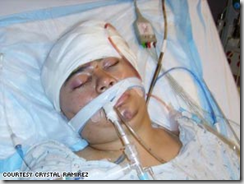 I suppose the Cantu family should be happy because unlike the Ramirez family, their loved one is still with them.  Ramirez had the nerve to be walking at night, when 7 men beat him to death.  They repeatedly screamed racist slurs as they pummelled his defenceless body.  The justice system put on its well known blinders and his killers where charged with assault, instead of murder.  They received six months in prison, even though the Ramirez family was sentenced to a life of mourning for the loved one that they lost.

In the case of Ramirez he was blamed for being in the US illegally.  Many felt that had he been in Mexico where “he apparently belonged,” he would be alive today, thus allowing his “good” murderers to live their lives.

When these incidents are not blamed on the victim, they are often seen as unconnected acts.   When White men are violent it is because they have individual issues and not because society has placed them in a position where they are not held accountable for the  privilege and power that has been embedded to their bodies.  Each action has reverberations throughout the community that is attacked.  It serves as a stark reminder to all people of color that our place is subordinate to Whiteness and that our very right to exist is at the whim of others.

We are told that we must respect the rule of law and yet it continually acts in ways that are not in our best interest.   People of color are over represented in the penal system and often receive much harsher sentences for the same violations of the law committed by White criminals.

When Sonia Sotomayor commented that she would bring her life's experiences to her decisions if she was appointed to the Supreme Court, the White Supremacist state immediately went on the offensive.   We are not meant to see race unless it is to the benefit of Whiteness.

Imagine the situation were reversed and Latino men were dragging white men around a parking lot or murdering them for walking their sister-in law home; do you believe for one moment that the sentences would be the same?  These men would be constructed as violent barrio boys and if they breathed the fresh air of society again, it would be long after they had switched from briefs to depends.

Even as membership in White Supremacist groups rise and we are witnessing an increase in crimes against people of color, we are still constructed as the violent and often times savage members of society.  The devaluation of people of color is understood to be the work of a fringe group, even though those who claim the mantle of liberal regularly participate in the over valuation of Whiteness.  It is always a group of “others” that are racist allowing those who claim to be allies to ignore the ways in which they benefit and promote white hegemony.

If this makes you uncomfortable then it is good.  It is far less pain than that experienced by either Cantu or Ramirez.   We are not post racial, we have not reached the imaginary mountaintop. White supremacy is real and it has infected all of the agents of socialization.  The only people that are in denial of this have internalized the meme of Whiteness as good to serve their own ends.