Allison McCarthy is currently a graduate student in the Master of Professional Writing program at Chatham University and a freelance writer covering topics on social justice, anti-racism, and feminism(s).  Her short fiction and journalism have been featured in magazines such as Girlistic, Global Comment, ColorsNW, The Baltimore Review, The Write Side-Up, Scribble, JMWW and Dark Sky.  She has recently contributed guest posts to the blogs The F-Word UK, Girl with Pen and Womanist Musings and an author interview for the LGBT group blog The Bilerico Project. 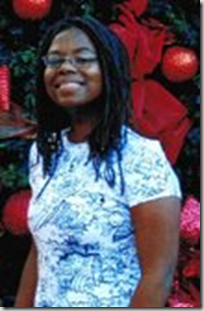 The headline reads “She Finally Has A Home: Harvard,” highlighting the unlikely narrative to unfold.   The L.A. Times recently profiled Khadijah Williams, an 18-year old African-American senior at Jefferson High School in Los Angeles, who is graduating this month with plans to attend the prestigious Harvard University on a full scholarship this fall.  What makes her story particularly profound is that for “as long as she can remember, Khadijah has floated from shelters to motels to armories along the West Coast with her mother. She has attended 12 schools in 12 years; lived out of garbage bags among pimps, prostitutes and drug dealers.”

Jack and Jill posted a quick hit to this story with an admonition: “I dare you not to have tears after reading this.”  Similarly, The Moderate Voice, a self-described “Internet hub for moderates, centrists, and independents,” wrote that the article produced an emotional reaction in the post’s author, Jerry Remmers.  Remmers also claims that, “In Khadijah’s case, the system worked with help from a benevolent family in Rancho Palos Verdes, a Los Angeles suburb.  Read the entire story and you will agree it is what makes America great, a phrase I seldom use in today’s highly-polarized political environment.” (Emphasis mine)

Her tenacity under incredible hardship absolutely should be praised.  Getting accepted into Harvard University is a feat by itself (considering the school boasts a mere 9.2% acceptance rate).  To do so under life-altering circumstances such as homelessness is nothing short of miraculous.  There ought to be fireworks and a marching band in her honour!  She is clearly a young woman of high intelligence, talent, and strong character.  To have survived L.A.’s notoriously dangerous Skid Row, let alone flourish as Khadijah has, deserves many accolades, kudos, and support.

Yet, isn’t it telling that her individual story is held up as a shining example of “what makes America great” in 2009?  The rhetoric of this article credits Khadijah for her achievements, yet condemns her family – particularly her mother Chantwuan, who gave birth to Khadijah at the age of 14 – for failing to provide her with adequate care.  Once again, the individual narrative of ONE young person’s ability to overcome systemic poverty and lack of resources signifies that it’s somehow an individual choice to live in poverty, suggesting that those who are homeless merely lack the intelligence and wherewithal to overcome their circumstances.

Khadijah maintains that Chantwuan “tried her best; she never smoked or drank, never did drugs, and she never put us in abusive situations. However, that was the best she could do.” Defying the unfair yet popular stereotype of the lazy/substance-abusing homeless woman, Chantwuan could not escape poverty for herself and her two children, yet somehow she alone is to blame for her family’s situation. Nowhere does the article mention the lack of intervention by Social Services on Khadijah’s behalf.  At the end of the article, Khadijah finds Chantwuan and a younger sister, Jeanine, living out of a “South-Central storage facility… sitting on a garbage bag of clothes,” with “no talk of coming home of for Thanksgiving or Christmas.”

This raises some serious questions of accountability from the State of California:  Where is the assistance for Khadijah’s family?  Is there nothing that can be done by the state to provide shelter and living assistance for this family living in poverty?  Why is it easier to condemn Chantwuan for being unable to provide these necessities than to ask how the system could fail to help a teen mother and her two daughters?  Do we think it’s enough that Khadijah “rises above” even as her immediate family faces life on the streets?  Using Khadijah’s phenomenal achievements as an example of “what makes America great” shows little consideration for the multiple ways in which many American homeless youth are disenfranchised of educational opportunities.

According to the Fact Sheet “Education of Homeless Children and Youth,” published by The National Coalition for the Homeless in June 2008, homelessness fosters devastating effects on a teenager’s educational opportunities.  Homeless youth are also a rising population, as “Families with children are by most accounts among the fastest growing segments of the homeless population. In the United States today, an estimated 1.35 million children are likely to experience homelessness over the course of a year (The Institute for Children and Poverty, 2004). This number represents two percent of all children in the United States, and ten percent of all poor children in the United States.” The article further notes:

“Residency requirements, guardianship requirements, delays in transfer of school records, lack of transportation, and lack of immunization records often prevent homeless children from enrolling in school. Homeless children and youth who are able to enroll in school still face barriers to regular attendance: while 87% of homeless youth are enrolled in school, only 77% attend school regularly (U.S. Department of Education, 2004)… Homeless youth are often prevented from enrolling in and attending school by curfew laws, liability concerns, and legal guardianship requirements (Anderson et al., 1995).”

These factors are significant systemic issues which cannot be overcome solely through individual effort.  The L.A. Times article continually references the numerous teachers, guidance counsellors, and networking programs Khadijah reached out to in order to achieve academic success.  Yet these efforts do not extend to a wide net of homeless youth in need of educational resources.  Although Khadijah will go on to pursue a career as an education attorney, are the aspirations of other homeless teens being similarly encouraged – or do the cycles of poverty continue, as they have for her young sister, Jeanine?

It isn’t enough to shed a few tears of pride for Khadijah Williams while subscribing to false notions of a balanced educational meritocracy.  Class divisions which lead to inhumane living conditions, educational imbalances, and inter-generational poverty must be addressed, particularly in our struggling economy, or we risk losing the talents and contributions of our homeless populations.