The Name Of This Blog Is

I have repeatedly posted about why I am not a feminist.  For many reasons that I will not repeat; it is not a label that I can comfortably own as a WOC.  Even though there has been much racism directed at WOC, I deeply respect a lot of the gains made by the feminist movement, however once again it seems like a one way street.

The name of this blog is WOMANIST MUSINGS, ergo the person writing (that would be me) is a WOMANIST.  I don’t believe that it is a very hard concept to understand and yet I repeatedly receive either commentary on the blog itself or via e-mail referring to me as a feminist.  Quite often I receive requests to write publicity posts in the name of feminist organizing; I understand that these are sent as mass generic e-mails, however if one is attempting to raise awareness about oppression, the best place to start is not by repeating hierarchy and ignoring the legitimate existence of another.

Taking the time to differentiate between womanist and feminist takes an effort that far too many are unwilling to make.   Womanism exists because of the generations of racism by white women.  WOC have spoken forcefully about the ways in which a monolithic representation of womanhood is racist and yet despite our pleas for understanding we continue to be constructed as invisible.  Despite the so-called progressive politics of feminism, it is quite dedicated to supporting white hegemony.

We are not fooled by your half hearted attempts at inclusion. Hello Feministing, “Quick Hit” does not absolve you, especially when you take the time to write long drawn out posts regarding the politically anti woman Sarah Palin.   Unless you are willing to deal critically with race and offer insightful analysis, your behaviour is just as insulting. 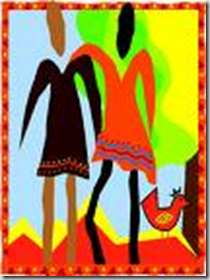 I am tired of spending my energy trying to get privileged white feminists to understand the ways in which their behaviour mimics patriarchy.  The same action that these women would not tolerate from a man, they are more than willing to subject women of color to.  Gotta love how vagina solidarity works until the woman is question is understood as “other”.  I could dedicate a lifetime to yelling and cajoling white women all to no avail.   For many white feminists all that matters are the ways in which a WOC can be useful.  When it is about promoting something that is in their best interests we are all women.

Every time we are used, or our issues are ignored, it drives WOC running and screaming from feminism and I suppose that is the point.  It has never been about solidarity or sisterhood; it has always been about making the white female the equal of the white male.  When we make it clear that we are not to be used in such a manner, the pearl clutching begins.  It has become tiresome and insulting. Dear white feminists, please stop playing the same game, Sojourner Truth long ago read your cards correctly.

What I have learned from my interactions with white feminist women is that I must definitely invest in womanhood, however the woman that I will be promoting and investing my energies to will be of color. We cannot count on those that daily oppress us to champion our causes.  It might be cool to quote Audre Lorde or bell hooks but their words have just become slogans for you to pitch out of your latte sipping lips without any real thought to what these women were actually saying.  Quoting them has become the equivalent of saying I voted for Obama and therefore I could not possibly be racist.

Continuing to fight for our issues by trying to educate a group of people that refuses to listen or attempt any real change only serves to ensure that WOC remain at the bottom of the race, class, and gender hierarchy.  I could earn a perfectly good living yelling at white women as several WOC already do but because I want real and lasting change I know that my energies must be directed at those society has chosen to create as “other.”  There is a reason why Womanism exists and until you can acknowledge that we are entitled to basic human respect my focus will be on uplifting those that society has forgotten.  Enough with white feminists being the center of activism, conversations and all other relevant activity.  Whiteness doe not necessarily grant you fitness to lead.