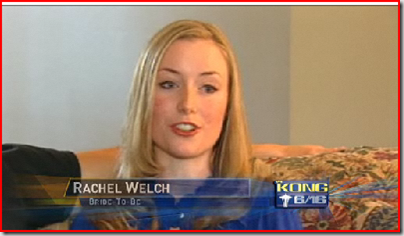 21 year old Rachel Welch decided to save her first kiss for her wedding day at the age of 14.

“That will keep me out of trouble and I just wanted that to be a special gift for the man I was to be married to.”

She is engaged to Todd Ritter who could not be more pleased with the innocence of his future wife, though he has kissed other girls himself.

“I’ve finally found someone who really respected herself and so that made me respect her even more”, said Todd.

Watching this video I did not doubt for one moment why this was a story of interest.  Welch is an attractive young white woman, the typical representative of the purity myth.  I don’t ever recall seeing a young woman of color celebrated for making the same decision and this is not because we are all rampant sluts, sleeping with anyone that has a penis.  The bodies of women of color are deemed highly sexualized by whiteness whereas white women are constructed as the epitome of female purity and goodness.

While I respect the decision of a woman to remain a virgin; if the impetus behind said decision is giving a “gift” to a man, it is problematic to say the least.  Men are encouraged to explore their sexuality whereas a woman who performs similar behaviour is quickly devalued and labelled a slut.

Sex is a basic human instinct and to moralize it in this way is ultimately limiting.  The idea that Welch respects herself because she has not allowed anyone to kiss her is ridiculous.  This kind of thinking limits female sexuality unless it is proscribed by patriarchy.  Though she is seen as someone who is ultimately in control, in actuality she is little more than a marionette dancing to the beat of male desires.

Respecting ones body should mean things like make decisions that are in our best interests and not necessarily be reduced to what we do with our vaginas.  You will note that there are no stories about men saving themselves because they want to present a “gift” for a future bride.  Female bodies are deemed for consumption of masculinity and therefore the idea that one should save themselves for marriage is aimed at women.  The incestuous purity balls far outnumber any ceremonies in which boys/men pledge innocence. This is not about respect or love, this is about control…period.

These kind of stories are meant to uphold the image of white female purity and in so doing entrap young women into making decisions based in a patriarchal standard.  Sex should be about sharing an experience with a partner not giving yourself to him, like a present under the Christmas tree.