Last night was the BET tribute to Michal Jackson.  I am the first to admit that there are plenty of issues with BET in terms of plain old fashioned coonery and sexism, however their attempt to honour Michael came from a good place.  I did not watch the show, as I refuse to pay for that kind of nonsense to be beamed into my home furthermore I am raising two young boys that do not need their heads filled with that kind of nonsense.  A network that can produce hot ghetto mess is not worth five seconds of attention.

As one would expect many people watched the tribute and were tweeting their experiences.  I tweeted my thoughts of the red carpet which was hosted by Don Lemmon on CNN. (Yeah I know, did you think you would see the day when BET was featured on CNN?)  At any rate, with the number of people watching and tweeting, it quickly became a trending topic.

Twitter became a bridge for people to come together to share their impressions on the ever controversial BET.  This interactive format gave many people of color an outlet for our frustrations, rather than the usual snarky commentary from a couch that goes nowhere.  Twitter provided a platform for the voices of people of color.

There are those that found the trending topics disturbing.  How dare black people have the nerve to communicate with each other in such large numbers.  Did we actually forget that the internet was created for whiteness? 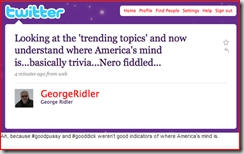 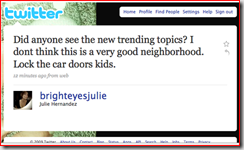 The above are just a sampling of the tweets posted last night.  The rest can be found here. Dear God who let Black people on twitter?  Seriously, allowing these topics to trend is a legitimate threat to white hegemony….Whiteness must be the center of any and all conversations at all time, otherwise uppity people of color might come to believe that their issues are worth serious consideration.

We have moved to such a post racial state that it is not necessary to talk about issues that concern Blackness, Whiteness can function as the default for all. There certainly isn’t any racism or privilege involved in this at all.  WHEEE… My, how things have changed since, slavery, reconstruction, Jim Crow, the civil rights movement and the election of a Black president.