Perez The Queen Of Mean Got Slapped 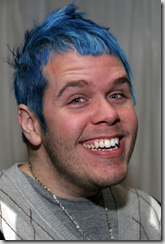 Perez Hilton has used his acerbic commentary to launch him squarely into the status of B-List celebrity.  He is not shy about announcing to the world the millions that daily visit his blog to intake the often sexist, racist, transphobic and classist commentary that is supposedly humorous.

Perez is an attention whore.  I know that I am feeding this monster by even bothering to blog about this but I simply could not resist commenting on his latest entanglement with Will.I.AM  of the Black Eyed Peas.

Perez claims to have been assaulted by the manager of the Black Eyed Peas after referring to Will as a faggot.  Let’s think about this for a moment.  A Gay man is using the word faggot as an epithet to humiliate and anger another man.  Does this not give one a moments pause? I know expecting Perez to use his few remaining brain cells is a tall order but a gay man calling another man faggot simply reifies the idea that ones sexuality can be used as weapon.  I wonder how happy Perez would have been had Will or his entourage called him a faggot? Somehow I think the Queen of mean would have bristled.  When you use faggot as an insult, you encourage others to do so.

In his video rant, Hilton complains of feeling intimidated by Will.  Of course everyone knows that Will is big, black and “subhuman”, how could a sweetly innocent Latino gay male feel anything but scared out of his mind?  Will, like so many others had the right to be offended by Hiltons commentary, however once again when called out he plays upon stereotypes to defend his speech.  He was ooooh so very brave to stand up to the big black thug.

Hilton claims that he was slapped by Wills manager.  Since I was not there, I cannot argue the veracity of his claims however if someone is staying at the same hotel as you, they are not stalking you when they return there at the end of the evening.  I would further point out, that if one is legitimately scared of violence repeatedly calling 911 is what most people would do, not get on twitter.  Nope, no attention seeking behaviour here at all.

I don’t advocate violence but I really am amazed that no one has slapped Hilton until now.  He continually writes checks that his hating ignorant ass cannot cash. He may not have deserved to have slapped for his foul ranting but perhaps this will cause him to think twice about where he points his poisonous pen in the future.  Language has penalties Perez and it looks like you will have to learn that the hard way.  Oh, the same God that you invoke on Will.I.Am is watching your pathetic ass as well and I am sure calling one of his beautiful creations (Fergie) Fuggalicious is not what S/he would call playing nice in the sandbox.