Rape In Prison Should Not Be Part Of The Punishment 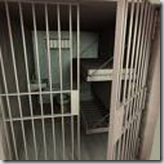 Once someone becomes part of the prison industrial complex, socially they lose a measure of humanity because we declare them to be lesser than individuals.  Some crimes are certainly heinous in nature, however rape should never be understood as reasonable response in a so-called civilized and or advanced society.

We commonly joke about “dropping the soap”, or make comments about “becoming someone’s wife”, thus referring to the criminal act of rape without acknowledging the harm that results from such action.  Popular television personality Judge Mathis even endorsed a game where the penalty for criminal behaviour is prison rape and this was viewed as socially acceptable.  Simply because it occurs does not mean that we should endorse the violation of another human being.

A federal commission on prison rape has concluded that the risk of being attacked depends greatly on the type of prisoner, and where the inmate is locked up.

Based on a 2007 survey of tens of thousands of incarcerated people, 4.5 percent of those surveyed reported being sexually abused in the previous 12 months — and more prisoners claimed abuse by staff than by other inmates. (source)

These are only the reported rapes.  Imagine the number of assaults that go unreported due to fear of retaliation.  If the person who commits the act of violence is a member of staff, the prisoner may feel even more intimidated as the staff member represents power and the law.

The purpose of prison is punishment and rehabilitation though the latter is often forgotten in our social desire to seek revenge.  If one is subject to rape, the possibility of rehabilitation is substantially reduced because of the occurrence of trauma.   How can we expect those we imprison to respect the rule of law, if we make exceptions as to whom it applies to?

We claim to have an equal justice system and yet when crimes are committed against inmates we ignore them.  When an uprising does happen it seems to the general public as though it has arisen out of nowhere, instead of as a response to the continued devaluation of their humanity.

Even when we deem it worthy to discuss the violations that they are subject to, most articles will make reference  to what the prisoner has been incarcerated for as though it is somehow relevant to the fact that they have been violated.  Murder and child abuse are vile acts, however that does not mean that the guilty parties  deserve to be violated.

Rape can never be considered part of the punishment because it is a crime and a gross violation of human rights.  We need to understand that these people that we treat as animals and savages, will at some point return to our society and therefore we should consider what kind of monster we are creating by our penchant for reducing bodies to  existing  for the sole purposes of violation.