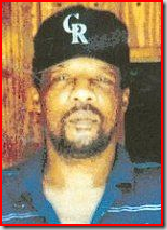 Eleven years ago today, James Byrd met his death at the hands of Lawrence Russell Brewer, 31, Shawn Allen Berry, and John William King, both 23.  Byrd was walking home when he was picked up by these men. He was pulled behind their  pickup truck by a chain attached to his ankles. He was alive when his head, shoulder and right arm were separated.

At the crime scene deputies followed the dark red stains for a mile and found Byrd's head and then his right arm. Another mile, and they found tennis shoes, a wallet, even his dentures. And then the trail ended, at a churned-up patch of grass strewn with empty beer bottles, a lighter bearing white supremacist symbols and a wrench set inscribed with the name "Berry." They dumped his mangled body in a cemetery and never looked back.

King was a known rabid racist long before the death of Byrd.  At trial it was reported that he stated, “blacks are different from whites and are taking over everything -- taking over welfare.” In a jailhouse letter to Lawrence Brewer while on trial he wrote, “Regardless of the outcome of this, we have made history," King said in a letter intercepted by jail officials. "Death before dishonor. Sieg Heil!"

Kings actions serve as proof as to why we cannot afford to ignore hate speech.  Language such as this often leads to violence and because it is the most marginalized sections of society that often bear the brunt of the violence, the government has been lax in realizing the seriousness of it.  Language that necessarily dehumanizes another being has historically lead to murder and this is a fact that is true regardless of what country we examine.

The murder of Byrd had reverberations throughout the African Diaspora.  Despite the claims of whiteness about how evolved America had become, the fact that a Black man could meet his end so cruelly proved to all just how racist the world still was/is.  Former Texas Governor, George W. Bush, declined an invitation to come to Jasper personally to show his outrage over the racial killing.  Is it any wonder he was slow to act when Katrina occurred?

Even those who might have personally felt ill at the thought of the actions of Byrd’s murderers failed to acknowledge that it is actions like this that maintain the White supremacist state.  White hegemony is supported by purposeful actions and whether it is the murder of James Byrd or the purposeful action of white flight when a neighbourhood becomes to “dark”, it is a force which exists through sheer will and determination despite the best efforts of people of color to achieve equality.

White liberals spout the words of Martin Luther King and speak of a post racial world in which the systemic racial issues have either been solved or are well on their way to ending and yet a scant 11 years ago Jasper was  filled with so much racial animosity that the cemetery was segregated.  Even in death people of color were not deemed the equal of whiteness.  What mountaintop have we reached? The Klan roots have always been buried deep in Jasper and though there are those that would blame it on poverty and a lack of education, the reality is that racism is taught in every single social institution and that is not unique to this little town.

All three defendants were found guilty of capitol murder, with King and Russell being sentenced to death by lethal injection.  While his murderers were forced to pay for their crimes, the problem is that Blacks are still subject to violence based in race.  If these incidents continue to occur how can we possibly declare this a post racial world? Brandon McClelland died in the same fashion as Byrd in 2008, proving that regardless of the potential punishment because racism has become such a necessary facet of maintaining undeserved privilege, whiteness will continue to commit violent acts.  Even as whiteness prided itself on being racially blind enough to elect a Black man as president yet another Black man, Oscar Grant met his hands at the hands of a White police officer.  These murders are not the actions of individuals temporarily “losing their minds”, they are the result of systemic racism and a desire to ensure that Blacks lead lives entrenched in fear.

Our bodies have always been the target of White anger and racism even as we are constructed as violent and savage.  Even speaking about racism is considered divisive as whiteness would much prefer we sing Michael Row the Boat Ashore and pretend that the crimes against us have come to an end. We cannot forget James Byrd and the cruel way in which he died because at any moment we could be next.