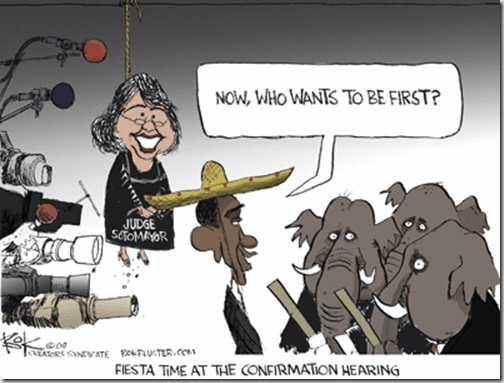 This racist/sexist cartoon appeared in The Oklahoman.  There she is hanging like a piñata with Obama in a sombrero because of course there are no other markers of Latino culture that they could turn to.  I’m actually surprised that they didn’t draw the name Maria on her forehead, or place a jalapeño pepper in her mouth .

If the racism where not enough the incitement of violence is certainly the coup de grace.  In a country in which women suffer violence at the hands of men on a daily basis to have them line up to take their “best shot” at her is not innocent political commentary.

According to the Oklahoma Women’s Network Blog:

Oklahoma ranks as the 3rd worst state in the nation for women. Much of what holds Oklahoma women and girls back is linked to our state’s culture of violence and disrespect for women. Oklahoma ranks #4 in women murdered by men, #1 in child abuse and our domestic violence shelters are full of women escaping violence.

Violence against women is not a matter that we can take lightly when daily women are murdered in cold blood.  When we consider that Sotomayor has largely been constructed as an angry Latina who does not know her place by white males on the right, this image serves as a warning to all women to stay in their place.   It suggests that when a woman attempts to step outside of roles that have been traditionally assigned to  them by patriarchy that men have the right to resort to violence.

How often have we heard men tell us how good we have it in North America in comparison to women in other countries.  This claim can only be made by ignoring the violence that women here live with it.  The fact that violence against women has simply become so normalized that it can be reduced to a joke reveals that the liberation and freedom in which we are told that we live is non-existent.

If you are as disgusted with this imagery as I am make sure to let The Oklahoman know.   If it is so easy to reduce a woman as remarkable as  Sotomayor to cannon fodder what chance do any of us have against those that are determined to ensure that women continue to live in fear?

Guidelines for Your Views

What we require
1. Letters of 250 words or less.
2. A full name and complete postal address, including zip code, must accompany your letter. (This is needed for verification. Your address won’t be published.)
3. “Name withheld” letters are not accepted. Nor are letters signed only with initials or a first initial and last name.
4. E-mailed letters cannot be sent as attachments.
5. Authors are limited to one letter every 28-42 days, depending on volume.
6. When referring to a news story or previous letter published in Your Views, cite the headline or letter writer’s name and the date of publication.