A Statue Of Ronald Reagan Does Not Make Us All Happy 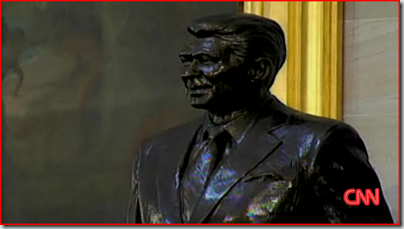 Though the GOP has had to reach back to Regan to find a representative that the populace can find as a reasonable model of their ideology, even in his time as president he was despised by many because of his homophobia, racism and war on the poor.  The Great communicator made sure his constant refrains were filled with white and straight privilege.  Click the above image to see the unveiling of his commemorative statue,

Speaking to us like a doddering old grandfather full of paternalistic concern, he waged war on the most marginalized sections of society.   When one announces an intention to run for the highest office in Mississippi and declares themselves to be a supporter of states rights (code for the promotion of white male elite privilege), it is clear that old Ronny certainly knew how to wrap his snake oil in a way that would be considered non offensive.  The right wing were quick to latch on to him as they recognized his ability to "close the deal” better than a used vacuum cleaner salesman.

The man that has become a great cult hero campaigned against the civil rights movement, the peace movement, the student rights movement and the Great Society.  His war on drugs became a war on people of color as he built the prison industrial complex to never before seen levels.  Even as people of color struggled under the what at the time was considered the worst depression since the Great Depression, Regan infused his war on poverty with his commentary regarding welfare queens driving welfare Cadillacs.  Instead of society holding big business accountable for their crimes and worker exploitation, the most marginalized – the black woman was found guilty of living off of the government purse.

He is directly responsible for the low level of union density in the United States.  When he had the air traffic controllers arrested, he effectively broke the back of unionism forcing all those remaining to practice business unionism and  as a result bargain away many of the gains that had resulted from decades of

organizing.  Those who were poor in his two terms in office learned that Reagonenomics simply meant enriching the bourgeoisie elite on the backs of the poor and the working class.  His massive military spending meant that infrastructure, education, homelessness and health care went ignored.  He may have spent the Soviet Union into oblivion but the legacy of debt left by his policies has yet to be repaid.

When we celebrate Ronald Reagan we are reifying the cult of rich white male hegemony.  The above is merely a snippet of why Reagan is a problematic figure and yet his statue now stands in the capitol as though he is a man to be celebrated.  America is full of conflicting standards; its founding fathers wrote a constitution and a declaration of Independence declaring equality amongst men while African Americans laboured in chains and its women were without voting and property rights.  In the name of conquest the Indigenous Peoples were nearly erased from existence.  Amongst its own people the American government has been slow to grant rights and freedoms and instead has sought to promote the fitness of white male headship.  Reagan was not some sort of saviour or kind hearted leader, he simply followed in the footsteps of those before him.

It is an offense to all marginalized and exploited bodies that he should be celebrated in this way.  Though revisionist history has always been a part of maintaining the false social beliefs that proliferate society, at some point we need to begin to look at these former great men for who they were.  Regan ruled in the decade of greed and profit and almost every action that he undertook ensured the status quo.  If you were rich, white and male this was the time of your life, if however you belonged to the invisible mass of workers on whose shoulders these men stood, hardship was a way of life.