Whom Can We Touch

Sunday was Father’s Day and so we went out to dinner to celebrate.  When Destruction was telling the waitress what he wanted to eat, she reached out and pinched his cheek.  After she left, he told me that it hurt and that he really did not like that she had touched him.  Upon her return after clearly thinking about the incident, he politely told her that she hurt him and he would appreciate it if she did not pinch him again.  Destruction has always been protective of his personal space.  I remember when he was three and got into a scuffle with a Walmart Greeter when she wanted to hug him.

Once he became old enough to understand what I was saying, I began asking if it was okay to kiss or hug him.  I never presumed that I had the right to have access to him because he is my son.  Most of the time it is always an enthusiastic yes, however occasionally it would be no I’m not in the mood.  I have never gotten upset or felt rejected, I simply tried again later. Our children have never been forced to hug or kiss our friends or relatives.

Most western adults function with a desire to remain a personal safe space.  It is one of our unspoken social rules and we consider it rude when people invade that space.  Depending on who is doing the invasion, it  may feel like an assault.  The personal space rule is one that we don’t widely apply to children or pregnant women.  These bodies are deemed public bodies which we touch at will.  This is very reflective of how much power they have and the degree of respect we have for them as individuals.  It is an act of privilege and power to assume that we have the right to simply touch someone without asking.

As a male, Destruction will over time gain a form of autonomy over his personal body that would not exist if he were born female.  To this very day many still assume that they can touch my hair because they are curious about its texture; this is in part due to my race and in part a reflection upon my gender. 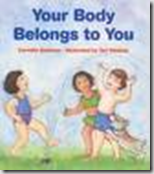 Touch is bifurcated into good and bad, with  overt unwanted sexual overtones often being associated with bad touch.  A bad touch should be defined as anytime a person invades your space without permission and not relegated to what part of your body the person is demanding access to.

In the moment that the waitress pinched Destruction cheek, though she meant no harm, it reminded him that as a child he has no real power over his body.  No matter what our intentions are, we must always give thought about whose space we choose to invade and why.  Often who we choose to touch is an expression of where we stand on the social hierarchy.  In everything and everywhere there is always power.