WOC Are Not Welcome To Sell L'Oreal Products 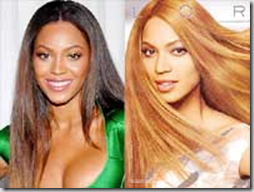 L'Oreal has been careful to cultivate a multi-racial image to the public while participating in discrimination in its internal hiring process.  When you consider the lightening of Beyoncee’s image, it is not hard to believe that they would engage in practices that exclude women of color.

SOS Racisme, an anti-racist campaign group in France  filed the case against the cosmetic giant.  L'Oreal used an all whites sales staff to promote its Fructis shampoo products.  According to Essence.com:

A fax was issued into evidence that requested hostesses must be between 18-22 years old, wear a European size 38-42 and be BBR. Apparently, BBR stands for "bleu, blanc, rouge" or French for "blue, white, red" the colors of their French flag which is also code for white people. This ends a three-year legal battle for the L'Oreal bosses who apparently were "disappointed" by the court's decision. They will now have to pay 30,000 Euros in fines and another 30,000 in damages.

It seems we are good enough to shill their products to the public but not good enough to earn a living behind the scenes.  According to oneindia only 4.65 per cent of the hostesses hired for Garnier's campaign were black, Asian or Arab.  That would seem to be a fairly white representation to me.  The Times online states: “Before the BBR fax went out, the agency had been offering a pool of candidates in which 38.7 per cent were from ethnic minorities, suggesting that they had been blocked during the final stages of recruitment.”

France has always been a xenophobic and ethnocentric country, even as it claims to be forward thinking and accepting of different cultures.  French means what is always has – white.  This decision comes on the heels of Sarkozy’s attempt to outlaw the burqa under the guise of freeing women.

It is worth noting that companies like L'Oreal have always been more than willing to profit from us but seem to have difficulty in employing WOC in meaningful positions.  It is obvious  that L'Oreal sought the easiest way to exploit us while at the same time cultivating an image of tolerance, though clearly the whitening of Beyonce Knowles testified to the fact that even a superstar had limited value if they are of color.

Of course L’Oreal expressed disappointment with the verdict.  What organization would be pleased to learn that they had to discontinue their racist practices and create an equal workspace?  You will note that there was no apology offered for their behaviour, suggesting that their remorse was a reflection of the censor and not their actions.    Isn’t it nice to know that in this so-called post racial world women of color still have their uses…