Last night little Destruction came home from the park and announced that some bullies called him gay.  My mind instantly went to the two little boys who recently committed suicide after receiving  taunts like this.

I turned my head and asked, “What is a gay man?”

He is someone who loves other men like you and daddy love each other,” answered Destruction

“Therefore”, I stated “if they are just like everyone else, calling you gay is not really an insult now is it?  Calling someone gay as an insult is just someone who is  to dumb to come up with a real insult.”

He stopped and thought over what I stated and said, “you know what, you’re right mom.” 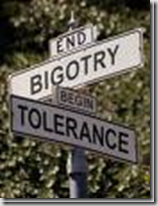 Score one for momma.  I have always taken the time to show him when I can images of gays and lesbians and point out that their love is the same as the love he sees shared between his father and I.  I think that because we have made an issue from a very early age of pointing out that difference does not mean less than, this line of thought was very easy for my little Destruction to understand.

While it is very important that we demand that our schools enforce a zero tolerance policy for homophobia and transphobia, we also need to teach real and practical lessons in our home.  Despite the fact that fundies like to speak about gays taking over, or removing rights from heterosexuals,  the truth is that being bi-sexual, gay, or lesbian, still means that one exists with a stigmatized identity.

I don’t know what my child's sexuality will be but regardless I want him to grow with a fundamental respect for all human beings and that begins by affirming life in all of its manifestations.  Just as children don’t perceive people of different races as inherently less than, they don’t see a GLBT identity as deviant.  We actively teach them through the agents of socialization, that heterosexuality is the norm and the most desired sexuality.

Teaching my child about equality and respect for human beings is part of my activism and it is part of how I show my love  for them.  A mind that is filled with

hate does not reason, it simply repeats ignorant rhetoric.  We cannot count on our schools to teach our children because the teachers and administration are all steeped in the same heterosexist, transphobic culture as the obvious bigots. Unless one is committed to fighting underserved privilege on a daily basis,  one will necessarily pass along the message of intolerance.

Working to end  privilege is a lifetime journey and much of what we take for granted as normal has been specifically constructed to ensure the maintenance of a hierarchy of bodies.  Since most will face some area of stigmatization, teaching children to respect and maintain hierarchy as a normal social order means that at some point we are affirming that they are less than. The power structure that we teach them to embrace will at some point work to deny their rights, or justify violence or hate speech against them.

I choose to teach my child that there is power in  love and community.  I choose to teach my child that ALL PEOPLE MATTER.  As I go through this journey, I am cognizant that even as an ally there is much that I still must learn but even the acknowledgement of ignorance is powerful in a world that is committed to being purposefully obtuse.  Ignorance is a temporary state of being if one chooses to learn whereas blind hatred turns the heart to a bitter pill.  Choose life, choose love and talk to your children everyday because to avoid such critical lessons is to turn your child over to the forces of intolerance and hatred.