I don’t have the time to blog about this but I certainly had to share it with you.

Paging Keith Olbermann. You can call off the search...we've found your Worst Person in the World for tonight. 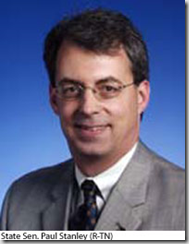 Meet Tennessee state senator Paul Stanley. He's a solid conservative Republican and married father of two, who according to his website is "a member of Christ United Methodist Church, where he serves as a Sunday school teacher and board member of their day school." (Check out the religious imagery on the site -- the sun poking through clouds, as if manifesting God's presence -- which of course shows Stanley's deeply pious nature.)

Stanley recently sponsored a bill designed to prevent gay couples from adopting children. And when a Planned Parenthood official recently sought his support for family planning services for Memphis teens, Stanley told her, according to the official, that he "didn't believe young people should have sex before marriage anyway, that his faith and church are important to him, and he wants to promote abstinence."

So far, so far Republican. But you can see where this is going...

In a sworn affidavit, a Tennessee state investigator has said that Stanley admitted to having a "sexual relationship" with a 22-year-old female intern working in his office, and to taking nude pictures of her in "provocative poses" in his apartment.

Well it seems that the GOP loves to live in glass houses don’t they?