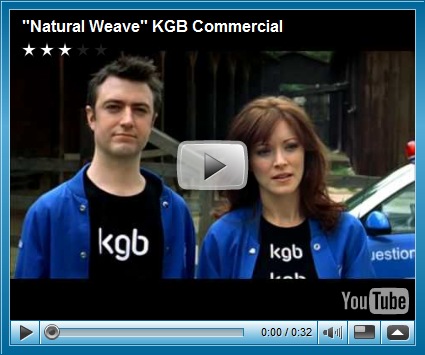 I suppose it’s all good fun to laugh at the lengths that Black women must go to train our hair into submission because we live in a culture that has constructed nappy hair as uncouth or wrong. A young Black girl learns at a very early age that hair is one of the ways in which she is decidedly “other” and less than.  I remember having to give countless explanations regarding my hair care as a child to fellow students and friends.  It seemed natural for them to remain ignorant about my life process, while I was in full awareness of their different beauty regimes.

Looking at this commercial only reifies the ways in which Whiteness is more than content to remain ignorant.  In fact, it symbolizes just another attempt to portray Black women as uncouth and bestial in their attempts to covet Whiteness.  Yep, just look at the ignorant Blacks putting yak hair in their head.

Weaves are either made from synthetic hair or real hair and I find this little commercial to be offensive on many levels. It ignores the sensitivity that is necessary when discussing Black hair.  Whites can use this as jumping point for a joke because they have never been demeaned in the same way.  Random strangers have never reached out and grabbed chunks of the their hair as though they are residents in a petting zoo.

This commercial is not marketed at Blacks despite its all African American cast;  it is targeted at Whites.  It smacks of, “if you don’t use our services you will be just as idiotic as these Black women” and heaven forbid a White person be on the same level with an African American.  They could not possibly hope to target this commercial at a predominately Black market because of its demeaning nature.

They could have chosen to stick with questions that are not necessarily raciaized but encouraging difference means that Whites who have a vested interest in displaying an elevated social position, will be attracted to this little ad.  Profiting off of coonery is something that the media has become quite adapt at.  Thank goodness this service exists so that even ignorant Blacks can be taught about their foolishness.  The beauty regimes of White women of course remain above suspicion.  They would never be silly enough to put yak hair in their heads.   White women are understood as naturally beautiful and need no such intervention.

I suppose I am being to sensitive by being upset by this reductive display.  And you can be certain that my anger is misplaced and only an example of the ways in which Black women walk around in a constant state of rage.  Whiteness bears no responsibility in the daily reductions of Black women and the fact that a profit occurs is of course accidental.  Our bodies have never belonged to us and therefore, why should I expect Whiteness to show a modicum of respect when constructing Black female bodies.  Perhaps, I was simply born without a sense of humour; the ability to laugh at the debasement of bodies of color seems to be a necessary modern day characteristic.

No matter which angle you dissect this little thirty second spot from, only one conclusion is possible; the purposeful exposure of the so-called desperate ignorance of Black women.  Today, one need not use overt language because we have all become so well versed in interpreting the covert messages social organizations like the media employ to widen the race divide.  White people don’t even have the courage to own their racism in the ways that their ancestors did; instead they sell the lie of a post racial world, while patting themselves on the back for allowing their Black co-worker to look them in the eye.

Instead of accusing Blacks of playing the “race card,” as though only a White perspective on events is necessary, Whiteness should consider marketing their own points card for when they employ humour, or so-called ironic racism to widen the divide.  If we are determined to perpetuate a binary conception of the world, I do believe that Whiteness is entitled to its very own bigot card.  You can even borrow a tagline from Visa, making a racist commercial x amount of dollars, ensuring that whiteness continues to live with underserved privileges and racial impunity: priceless.