Paula Abdul’s publicist has announced that American Idol has yet to renew her contract <gasp>  Whatever shall the nations most watched popularity contest do?  I started watching Idol in the third season and I must admit I was drawn in by the bitter Cowell tongue, even though half of the time I wanted to smack him.  Every single time Paula would speak, I would roll my eyes and hit the mute button. 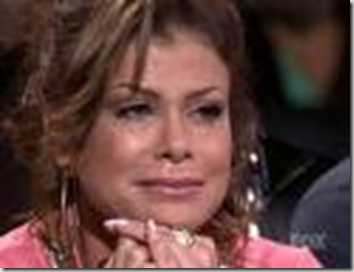 Ms.Abdul has clearly over estimated her value.  It seems that she is demanding twenty million dollars, however; producers are only willing to pay ten million.  It might sting a little considering that Ryan Seacrest was offered and accepted such a huge deal. Before Paula stomps away from the table with a head full of  self inflated designs, perhaps the former laker girl should really consider her options. Her partnership with Randy making how to sing videos is not going to keep her in the pseudo celebrity style to which she has become accustomed, furthermore; judging from the tacky jewellery that she is also shilling money does not flow in the direction of Abdul.  How many people does she really believe will be lining up to subject themselves to her nonsense, despite what her sheeple on twitter tell her?

Okay, I will give the woman her props in that she can dance but all the niceties end there. Can we all just be honest and admit the woman adds nothing to the show? I don’t understand how some one hit wonder ended up judging talent. She regularly confuses Idol with a fashion contest and spends more time on the contestants appearance than their performance.  Does anyone even remember the last coherent thing she said besides I love you?

There have been many rumours of substance abuse and on more than one occasion, it has been clear that she is either on some kind of drug or has lost all connection with reality.  Year after year I have watched her bicker with Simon and I have become convinced that it is no longer an act.  The woman is clearly irritating as all hell.

Last season when they introduced Kara DioGuardi how many started singing, SwingLow Sweet Chariot for Paula?  It was clear even then that DioGuardi was her projected replacement.  Kara may not offer anything new or challenging to the show but she speaks in whole sentences.  She can even sing on key, which is something Paula never managed to do despite having a very brief recording career.

I hate to tear a fellow woman down but truth be told, Paula is an embarrassment. When Paula showed up on Dr.Phil a few years ago, all I could think is how low can you go…Don’t we have enough negative imagery of women in the media without allowing her insipid commentary week after week?  I think it’s time Paula reach into the box of chocolates and  see what else she can find, because clearly being a B celebrity is far too taxing on her wee mind.  In case you were wondering, that was a Forest Gump reference.