Chris Brown Can’t Admit What He Did 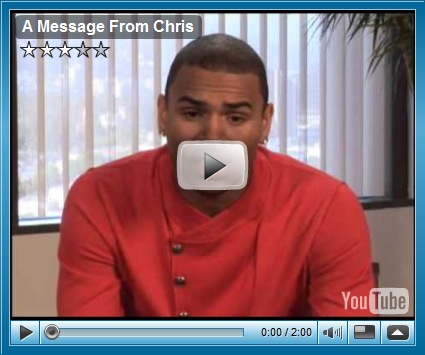 "I have tried to live my life in a way that would make those around me proud of me and, until recently, I think I was doing a pretty good job. I wish I had the chance to live those few moments again... I can not go into what happened  and most importantly I'm not going to sit here and make any excuses. I take great pride in me being able to exercise great control and what I did was inexcusable. I'm very sad and very ashamed of what I've done, my mother and my spiritual teachers have taught me way better than that. I've told Rihanna countless times and I'm telling you today that I'm truly, truly sorry, that I wasn't able to handle the situation both differently and better”

"I recognised that I've truly been blessed with a wonderful family, wonderful friends and fans. God has been generous in giving me the ability which has brought me fame and fortune. I've done a lot of soul searching over the last couple of months. I've talked with my minister and my mother, and I spent a lot of time trying to understand what happened and why ... I have let a lot of people down, I realise that, and NO one is more disappointed in me than I am. As many of you know, I grew up in a home where there was domestic violence. And I saw first hand what uncontrolled rage can do."

"I have sought and I am continuing to seek help to ensure that what occurred in February can never happen again. And as I sit here today I can tell you that I will do everything in my power to ensure that it never happens again, and I PROMISE that. What I did was unacceptable. One hundred percent. I can only ask (sic) and pray that you forgive me, PLEASE".

"I hope that others learn from my mistake. I intend to live my life so I am truly worthy of the term role model. Thank you."

I thought long and hard about posting this video.  The truth of the matter is that Chris Brown is nothing more than a new age Ike Turner.  He may have talent and be conventionally handsome, however; he is a bully and no apology can ever come close  to undoing the damage that he has done.  Every time a man beats a woman he batters us all and reminds us of just how vulnerable to male violence we all are.

What is most disturbing about this is that he keeps referring to it as “the incident”.  That is not taking ownership of his actions.  He violently assaulted Rihanna and threatened her life.   In Britain they have reduced funding for rehabilitation for wife beaters because they have the highest recidivism rate and it is now believed that there is little to no chance of permanently altering their behaviour.  They have decided instead to channel energy into helping women escape these marriages and receive counselling to deal with the post traumatic effects.

He claims that he “wished he had handled the incident better”, when he should have said that he never should have laid a hand on her.   I further find it hard to believe he thinks he should be considered a role model for anything other than how not to behave with a woman.  Chris Brown has a new CD coming out and I suspect this little apology is an attempt to smooth over any ruffed feathers so that he can continue in his celebrity status.

No one can deny that he is talented however; that is not reason enough to support the career of a man that has proven to be nothing other than an unrepentant woman beater.   I did not listen to his music before this happened, so me boycotting will have no effect but I encourage those of you who may have been fans to make a political decision to support women leading lives free of violence and not purchase any of his CDS or merchandise.  Take the opportunity to talk to others who may have been fans and discuss how serious what he did is.  Violence against women must end and therefore we must hold the perpetrators accountable for their actions.