How Much Has Changed For The Women Of Afghanistan?

The following video is extremely graphic. 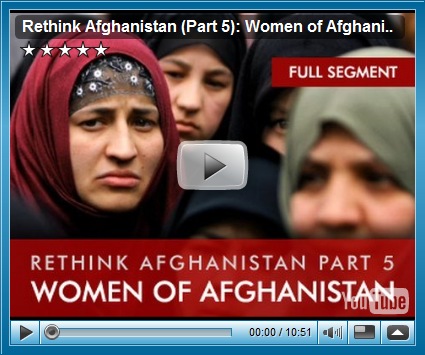 “If we have some women in Parliament if we have a Ministry of Women It does not mean that now Afghan women [are] free. Because for common women ordinary women the situation is the same. ”

What will it take to improve the lives of women in Afghanistan?

“Stop this war because our people is very tired with this situation.  And if they really want to help our people we don’t need more soldiers.”

“I don’t believe and I don’t expect any outside power to come and liberate me.  If I cannot liberate myself, no one from outside can liberate me. “

In their own words the women of Afghanistan give voice to the horror that we have inflicted upon them with this needless war of aggression.  Many westerners see what is occurring in Afghanistan as righteous due to the 9/11 attacks and the oppression of women however nothing could be further from the truth.  9/11 was a terrible day that will not soon be forgotten.  The people that died that day were truly innocent victims however there is such a thing as a measured response.  More Afghanis have died then were killed on that day.  The puppet government that has been installed is no better than the Taliban that ruled before it.  They are simply more sympathetic to western demands as they know better than to bite the hand that feeds them.

As a Canadian I continually see our participation justified as saving the women and yet from their own mouths comes the cost of this imperialistic mission.  Saving the brown people is a mission that Western nations have engaged in without ever admitting the ways in which this attitude is perpetuated by racism, (in the case of Afghanistan Islamophobia)  and a desire to create readily exploitable colonies.

As Obama begins to marshal more troops to engage one cannot help but wonder when the women and children of Afghanistan will finish paying the price for Osama Bin Laden’s misdeeds?  As my own government struggles with the rising dissent to our continuing participation, I cannot help but wonder what happened to the myth of Canadians as peacekeepers, rather than faux nation builders.

This war is not righteous and is as much a quagmire as the Iraq war.  You cannot win the hearts and minds of people as you trample their customs and destroy their limited infrastructure.  Their stories should not be lost in the desire for conquest.  There is always a cost to human actions and it is the most vulnerable that usually pay it. The Afghani women and children do not owe a blood debt to western nations and it is time in the name of decency to end this invasion.  NGO’s will do a far better job of creating change than any gun ever could.