Is Barack A Citizen?

I cannot believe that people are still pushing the citizenship non issue.  He has proven that he was born in Hawaii.  What I have noticed watching the protests is that the majority of those pushing this idea are white. Big surprise. 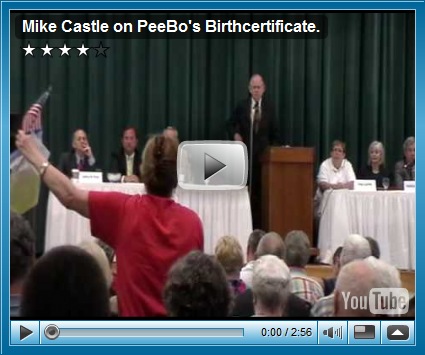 “Congressman Castile, I wanna know. I have a birth certificate here from the United States of America, saying that I’m an American citizen, signed by a doctor with a hospital administrators name, my parents, my date of birth, the time, the date.  I wanna go back to January 20th and I wanna know why you people (are) ignoring his birth certificate?  He is not an American citizen. He is a citizen of Kenya. …I don’t want this flag to change I want my country back.”

What this woman is really complaining about is a perceived loss in white privilege.   For this woman, American equals white. She has mentally ordered what bodies belong in what positions and leading the country is something that she still clearly believes that only white men should do.  Much of modern day racism is perpetuated through covert commentary but the meaning is quite clear if one is willing to listen.

Before you write this woman off as a lone, ignorant racist, consider that major networks have devoted a lot of time to this non issue. 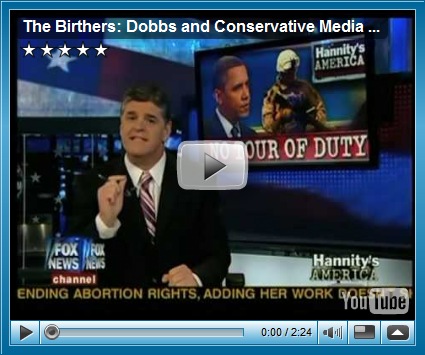 There it is, the most contested document of this decade…. 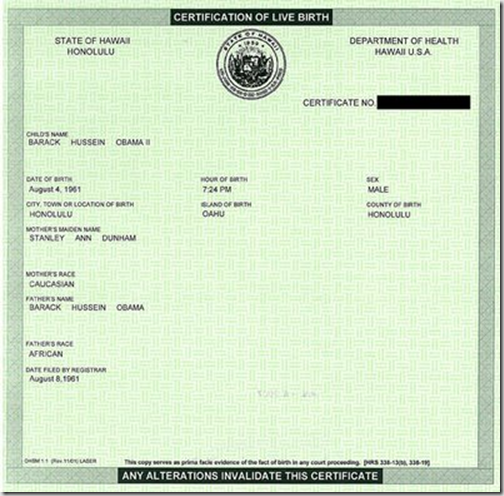 These people are grasping at straws.  Unlike many other politicians, Barack had to be purer than Caesars wife to be elected.  They thoroughly investigated his background and because they were unable to find any of the usual shady dealings or dalliances with women; they have centered in on his status as other.  They know that they cannot be obvious and cite his blackness as a reason to disqualify him and therefore they center in on his Kenyan ancestry.

The foreignness of Obama is about his Blackness. When Whites ask to see the person in charge, they expect to be responded to by a white male.  For many who only have the benefit of Whiteness, the possibility that it might be devalued as a currency is terrifying and so they respond with anger wrapped in patriotism.  The American flag represents more than a love of land; it represents all of the American history in which POC have been decidedly devalued. Slavery, capitalist exploitation, the near genocide of Indigenous peoples, rape and plunder,  have all been a part of fulfilling the American dream for Whiteness. It is galling to them that in spite of the obvious barriers placed in his way, that Barack managed to succeed.

Is it really any wonder, that despite his bi-racial identity, that Barack identifies as African American?  In his last standup routine, Chris Rock pointed out that despite his wealth no white people would want to switch places with him.  Barack is unapologetically Black because race dynamics in the US do not allow him to loudly claim his bi-racial identity.  They are quick to discount his White American mother because the color of his skin erases any possibility that he could have any commonality with them.  Whiteness pays lip service to equality but in practice it daily ensures that its power remains effectively unchallenged.

Though this is a right wing rant, I am sure we all remember the Hillary supporter that called Barack an “incompetent Black male” during the primaries. She could simply have referred to him as incompetent however, the color of his skin was added to point out what she clearly viewed his success as upsetting the “natural” order.  Regardless of which end of the political spectrum that one stands on Whiteness will not divest itself of its privilege.  This is not the case of the right wing crying bitter tears over an election loss; it is simply business as usual in a White supremacist state.