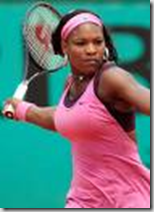 Venus and Serena Williams have dominated tennis since their first appearance in the nineties. Despite being champions many times over, they are still not given the respect that their accomplishment should merit, due in large part to their race and gender. Though we labour under the misconception that we have created a post feminist /racist world, the everyday experiences of women of color prove the mendacity of this social myth.

Words like “menacing,” “threatening” and “aggressive” are often associated with Serena. While these may not seem readily damaging, when one considers that Black women have historically been understood as “unwomen”; this language is an indication of a disturbing trend. Additionally, the epithet “tranny” is often used to insult Serena, thereby asserting that she is not a “real woman.” Though the category of woman is understood to be universally oppressed, white womanhood is perceived to subsume all that is good and desirable about femininity. This is a quagmire that women of color must negotiate to form any basis of self respect or agency.

Since the days in which Saartjie “Sarah” Baartman was forced to reveal her buttocks and labia to curious Europeans in a human circus, the bodies of Black women have been scrutinized and uniformly judged as lacking and/or sub-human. While our bodies may no longer be on display, the fixation with the buttocks of Black women reveals that the “The Hottentot Venus” stereotype is still very much a part of social discourse.