It’s All About The Sugar Daddy

If a woman agrees to date a man only if he spends large amounts of money on her, or takes her to fancy restaurants and trips is this the equivalent of being a sex worker? 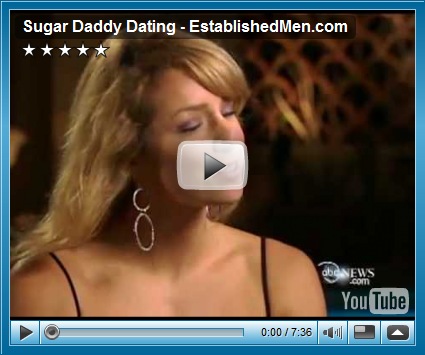 I was sent a link to Established Men.  The goal of this site is to match men of class privilege with attractive young women who are seeking to have their inner princess identity validated.  Champagne tastes on a beer wallet are still as incompatible as they always have been.  Nothing comes free in this life and no matter how angelic your face or how great the conversation is, when interactions begin with a power imbalance, in the end the weaker party must always pay the tab.

This site advertises itself as a dating site based in the premise that its owner, a former stripper met her husband while dancing and was instantly transported into a life of luxury.  Yep, you guessed it folks, pretty woman come to life except that Julia Roberts admitted that she was a sex worker; a woman for hire.  The women on this site are only “dating” and not working.

I do believe that under the right circumstances women can freely choose to engage in prostitution.  It would seem that after viewing the video and the site, that the men have made their priorities very clear; they are looking for a short term engagement with no strings attached and are willing to pay for the convenience.  Does this not sound like a typical john to you?

If you are going to make the choice to work as a prostitute, I think that it is important to acknowledge what you are doing.  “Dating” for the purposes of special gifts is the same as accepting money.  We do ourselves a disservice when we lie to ourselves about what our actions really mean.  These men are not going to sweep you away like Richard Gere did…Pretty woman was just a movie people.

This is not a relationship between “perfect princesses” and “generous benefactors,” it is a business contract between two adults and all of the pretty language in world will not change the terms of engagement.  It is further deceptive to describe the payment as “lifestyle needs “, as though everyone needs six hundred dollar meals and Prada purses to subsist.  Clearly, this is a business relationship which allows women to acquire products and services that they would otherwise be unable to afford.  These are the extras and not the essentials.

These men are not spending ten thousand for a kiss on the cheek and at the end of the day, they will expect a return on their investment.  The only reason that these “dates” are not openly referred to as prostitution by the participants is because of the stigma attached to paying for sex, or being paid for sex.   Despite the dream of being swept away by some rich man, it is more likely that this will be a short term arrangement, solely under the control of the benefactor (read:john).

People continue to view prostitution as something that happens in alleyways with a drugged out woman and a sadistic john.  Those that are able to command more money are call girls and treated differently than street whores.  Isn’t it interesting that no matter what area of society that we look at, class plays a substantial role in how we are understood.  I have no wish to slut shame these women for their decision and or actions but I do believe that it is time that we acknowledge that these relationships are about business and not love.