In May of 2007, Sean William Kennedy was walking back to his car when he was attacked and murdered by Stephen Andrew Moller.  As he beat him to death he repeatedly uttered anti gay slurs.

Moller… originally was charged with murder and faced the possibility of life in prison until Greenville County’s chief prosecutor offered the alternate involuntary manslaughter charge after a grand jury found "no malicious intent." The lesser charges carry a maximum sentence of five years.

Of course in his defence, his family claimed that alcohol was the reason that the murder occurred in the first place.  It was even suggested that a prison sentence could “hurt him”, he was after all supporting his nine month old daughter at the time of sentencing.  This  man that stood over Kennedys brain dead body and said, “You tell your faggot friend that when he wakes up he owes me $500 for my broken hand.” 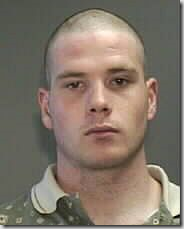 If the facts of the case don’t make you sick, how about the fact that Moller only served one year for the death of  Sean William Kennedy. In fact he was released one week early. He was given credit for the 7 months he served pre-trial and then three years of his five year sentence was suspended.  South Carolina has no hate crimes law.

The end result is that Sean’s mother received an automated message notifying her that the murderer of her son was being released.  So callously has this case been treated that they could not even be bother to personally notify this grieving mother.

Sean is dead because his hand accidentally brushed against Moller’s face.   Alcohol is absolutely no excuse.   Moller always had the potential to be violent. Sean was 20 years old when he died. No one will ever know what he could have offered the world because his light was taken from this world far too soon.

Sean’s mother Elke Kennedy said in a release. “He should have served every single day of the already short sentence, instead he was released from prison today, one week early. Where is the justice?”

Moller’s light penalty in the death of Sean is more evidence that some bodies continue to be undervalued in the justice system.   It is imperative for a hate crimes bill to be passed to help stem the violence that is often aimed at the GLBT community.  Moller would have received a heavier sentence had he abused an animal.

It’s been more than ten years since the death of Matthew Shepard and the GLBT community must still live in fear that their lives could be cut short because someone is determined to uphold their heterosexual privilege.  Justice is not blind as long as this kind of travesty is allowed to continue.

When marginalized bodies are targeted for violence, their murders are either not seriously investigated, or the penalty given to the assailant affirms that their lives are understood to be valueless.; this is true whether the victim is a sex trade worker, GLBT, or of color.

We don’t live in a society in which all bodies matter and the criminal justice system daily reaffirms the prejudices that we have built.  How many more must meet their end because we have decided that any deviation from the so-called norm renders one valueless?  We readily tolerate hate speech without acknowledging that it leads to deaths like that suffered by Shepard and Kennedy.

Hate speech is where crimes like this start.   The moment we begin to “other” a group, we are laying the groundwork for them to be understood as less than.  When a group or individual is deemed spoiled, historically they have been targeted for marginalization and even violence that leads to death based in the idea that they are not like everyone else.

If we are to seek equality and justice crimes against marginalized groups must be prosecuted as the hate crimes that they are.  We must end our tolerance for language that demeans an individual based in race, gender or sexuality.  We have given much lip service to circulating the myth that we are an advanced society and yet so many of our actions reveal that we really have not advanced very far from the days when Nero fiddled while Rome burned.  Each time we fail to speak out we are tacitly approving the violence and vicious hate speech we claim to detest.  Last year Kennedy was murdered and tomorrow it may be you.