Malia Called A Typical Street Whore At The Free Republic

The Free Republic is one of the most mainstream Republican blogs.  Though they have a policy which clearly states that they do not support racism violence, rebellion, secession, or an overthrow of the government, apparently it does not apply to the first family.  Malia is an eleven year old girl and her innocence seems to be irrelevant when it comes to directing hate speech. 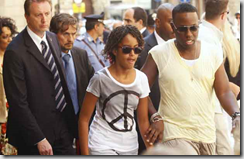 The controversy started because on their recent trip to Africa Malia wore a shirt with a peace symbol on it.  Of course this inspired nothing but hatred in the group think bee hive of the conservative set.  Dear lord, advocating for peace on a planet that has known far too much war simply cannot be tolerated.

"A typical street whore." "A bunch of ghetto thugs." "Ghetto street trash." "Wonder when she will get her first abortion. "Could you imagine what world leaders must be thinking seeing this kind of street trash and that we paid for this kind of street ghetto trash to go over there?" wrote one commenter. "They make me sick .... The whole family... mammy, pappy, the free loadin' mammy-in-law, the misguided chillin', and especially 'lil cuz... This is not the America I want representin' my peeps," wrote another.

When Kristen N, dared to complain about the language that was being tolerated the moderators temporarily removed the blog post, only to to repost it with her address and a copy of her e-mail complaint.  It is only after many left wing blogs wrote posts about this issue that The Free Republic finally decided to remove the post.

Malia did not choose to be a public figure and is only one by default of being born to the first African American president.  She is a child and had not begun to make her own way through this world.   The conservatives are continually harping about family values and yet it fails them when it comes to respecting the children of democrats.  It was not that long ago when Chelsea Clinton was treated mercilessly because of her pubescent appearance.

There are those that would claim that just because they are the first children that it does not mean that they should be sheltered from the racism that has become a fact of Black life.  As a parent I understand why this argument is presented because the reality of the situation means that even as we encourage our children to follow their dreams, we are forced to break the bubble of equality at a very young age.  As a child I remember my mother and father telling me that I could have anything I wanted as long as  I was prepared to work twice as hard and this is still true today.

It hurt me when I had to explain to my child why some children did not want to play with him because he was the “brown boy,”just as it hurt me to explain why store owners watch his every single move when he enters.  This is the reality of his life, though he is a bright and engaging little boy.  It is the reality for any child of color; their race speaks for them long before the content of the character is allowed to testify for their worth.

Even as we wish to arm our children against the slights and wounds that we are aware that the world is prepared to deliver, they are being robbed of their innocence.  Generation after generation of  children of color have had to turn their back on the innocence that should be a right in order to negotiate the evil of our racialized world. Malia Obama is no different than any other Black child however; is it really too much to ask for even one child to grow in a safe space where they are not subject to humiliation due to the ignorance of adults?

I am quite sure that her mother and father have prepared Sasha and Malia for the realities of their situation, however; no child should ever have to read commentary that refers to them as a whore, or ponders when their first abortion will be.  These comments that the Free Republic saw as unproblematic are representative of  racism and sexism that are typically aimed at young women of color. Malia is not even a teenager yet  already she is learning that because of her race and gender there will always be those that see fit to demean her in an effort to uplift themselves. Such is the curse of young Black womanhood across the Diaspora.