When Maria del Carmen Bousada gave birth at the age of 66 she was the oldest woman to do so.  She spent her life prior to becoming pregnant taking care of her mother who lived to be 101.  Upon her mothers death, she decided to embark up0n a new phase in her life.   She lied to fertility doctors in the US regarding her true age and underwent invitro-fertilization.

Dr. Vicken Sahakian, director and owner of the clinic, said Bousada falsified her birth date on documents from Spain.

When he learned of the deception, "I figured something might happen and wind up being a disaster for these kids, and unfortunately I was right," he told The Associated Press.

It's easy for women to lie to their doctors, Sahakian said.

"We don't ask for passports, obviously. When is the last time you went to a doctor and he asked you for a birth certificate? We're not detectives here," he said.

Sahakian said he implanted the Spanish woman with a younger woman's eggs and donated sperm, using hormone therapy to "rejuvenate" her uterus after she had been in menopause for 18 years. 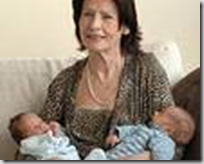 According to doctors, her late life pregnancy had no bearing on the cancer that eventually led to her death.  It may have been easy for Bousada to lie but considering that two boys are now orphans in a world that cares very little about the welfare of children, perhaps the clinic should have been more diligent in ensuring that Bousada was indeed within their stated age limits before performing this procedure.

Shortly after her sons, Pau and Christian, were born in December 2006, Bousada reflected on her decision to deceive doctors in order to have a family.

"I think everyone should become a mother at the right time for them," she told the British tabloid News of the World, which showed her beaming as she cradled her 1-month-old infants, both dressed in pale blue pajamas.

"Often circumstances put you between a rock and a hard place, and maybe things shouldn't have been done in the way they were done, but that was the only way to achieve the thing I had always dreamed of, and I did it," she said.

While I tend to agree with Bousada in that each woman should theoretically be able to choose when motherhood is a viable option in their lives, I believe there comes a point wherein the social good must be considered.  Even though Bousada’s mother lived to be 101, the likelihood of her living long enough to see these children to the age of majority is questionable.  As I type this, I am fully aware that many seniors continue to live very productive lives into their golden years, however; raising a child takes a tremendous amount of energy and is emotional trying under the best of circumstances.

Some may say that this is ageist and perhaps I am displaying a form of privilege but I do believe that this was an extremely selfish act.  Simply because we are capable of doing something, does not mean that we should.  Technology continually forces us to face questions that other generations never had to consider and we must weigh the rights of the individual against the social impact of their actions.

This situation causes one to consider many questions.  It is deeply problematic to uphold a belief in a woman’s right to choose and at the same time be concerned when age is factored in.  At what point, if ever, is it acceptable to ponder the age of the mother?  Who gets to decided when one is too old?  Is it acceptable withhold a service that would normally be available to younger women, after all she is still in control of her body; someone else is choosing not to intervene?  We know that men are capable of having children well into their senior years and should we deny women this same opportunity now that we have the technology?

Honestly this situation opens up a myriad of issues that I don’t believe can be decided on a necessarily black and white basis.  Every single time we have decided to intervene in the fertility of a group of people, it has been done to promote some form of privilege and bias has clearly been the basis of our decisions. I know that I would not have tolerated intervention in my decisions regarding fertility and perhaps I have no business commenting on that of Bousada’s but because children do not belong to the individual, I do believe we all have a responsibility to consider what is in their best interest.   Menopause occurs for a reason and when we flout the design of nature I do believe we are embarking upon a slippery slope.