Michelle Obama and the Pope: On Veiling as Debasement

Today we associate the veil strictly with the Muslim faith, forgetting that it has a rich tradition in Christian theology as well. After all, I Corinthians 11, verse 5 states: But every woman that prayeth or prophesieth with her head uncovered dishonoureth her head: for that is even all one as if she were shaven. 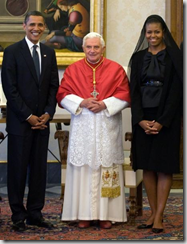 The veil is a very complex article of clothing, because it is filled with meanings that are both religious and secular in the sense that it promotes the patriarchal oppression of women. The leaders of the faith, regardless of denomination, have historically been male. Feminists have battled hard to reclaim the divine feminine in Christianity, however, such attempts continue to meet with great resistance.

The Bible is considered to be of divine inspiration and therefore its texts that address gender in a purely hierarchical sense are used to defend the role of man as ruler. For example, I Corinthians chapter 11 verses 8-9 state: For the man is not of the woman; but the woman of the man. Neither was the man created for the woman; but the woman for the man. In this, we can clearly see that the order of importance is God, man and then woman. Each gender is given a specific role to perform.

Though the Western world has a foundation that is based in the Judeo-Christian church, attendance has been dropping for decades. In an effort to appeal to younger congregants, to infuse the church with vitality, some compromises have been made. Many denominations have eliminated a strict dress code and it is not uncommon to see people arriving for Sunday worship in jeans and t-shirts.

The Catholic Church has been slow in keeping up with the modern construction of the world. It still advocates abstinence and is strictly against any form of birth control other than the rhythm method. While these prohibitions apply equally to male and female, because women are the ones that bear children, they form the basis of genderized oppression.