This is a guest post from RMJ of Deeply Problematic

RMJ (aka Rachel McCarthy James) is a freelance writer and tutor. She is originally from Kansas and presently lives in the Blue Ridge Mountains of SW Virginia with her fella and their cats. A feminist of white/able/cis/age privilege, RMJ writes about politics, language, literature, and the media. 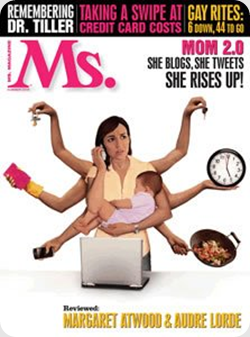 Above is the most recent cover of Ms. Mandy van Deven on the Bitch blog tore this apart for incorrectly appropriating Hindu imagery - rightfully in my opinion - and Veronica I. Arreola of the same blog disagreed:

I've always viewed the multi-armed image of motherhood as relating to an octopus. Again, growing up ignorant of Hindu deities, the octopus or spiders, especially in cartoons, were seen as having an ability us humans didn't have - extreme multi-tasking. And today's moms are pushing the boundaries of multi-tasking.

An octopus? No. This is not supposed to be like an octopus. Octopus' arms are fluid and unwieldy. The top two hands are in a specific position that is meant to recall the way people in meditative stances hold their arms. Additionally, each hand is definitively grasping an item, much as the Hindu goddess Durga does here: 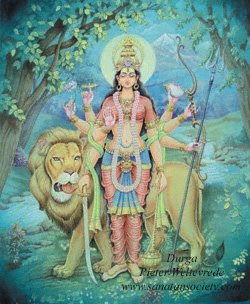 The Ms. cover is definitely mimicking this. Both women are facing forward, with their arms and bodies fully turned towards the viewer, and each arm is in activity. There's no way the Ms. cover is supposed to be a fucking octopus.
Arreola further writes:

So is the image on the Ms. cover a slap in the face to those of Hindu faith? Perhaps. But it's also the best way to depict the life of a today's mom. I'm not a student of Hindu deities, but were any of them also multi-tasking mamas? And I'm being totally serious with that question. I don't mess around with goddesses.

"I'm sorry, there's just no other way to perfectly express this!" is a tool of the oppressor to preserve their privilege. People frequently cite this kind of logic to justify their use of blatantly ableist language like "lame". I believe I remember saying exactly this to a friend to justify my use of the word "gay" when I was about 12. It's just, you know, a cultural touchpoint. It's just, you know, how you describe this idea.

Just because something is commonly seen in popular culture does not make it an okay reference to reify. No, not even if you're doing it to support moms. Come on. Privilege blinds, and appropriation in imagery and language is not okay if you're on our side.

Women can be shown to multitask with hydra heads, or with blurred hands doing many things, or... I don't know, something. There's no need to mock and appropriate the imagery of a religion that millions of people currently practice.
This is not a comparison I thought would be likely, but Ms.'s cover above reminds me of this widely criticized cover from the National Review: 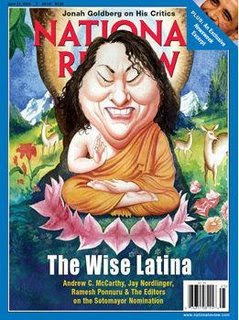 I like Ms. I have a subscription (thanks, Mom!) and it's definitely worthwhile. But this is retrograde and insulting and obtuse. I'm sure there's good material inside, but this is a poor way to package it, and it does not need defending.