Nappy Hair In the Jolie-Pitt World 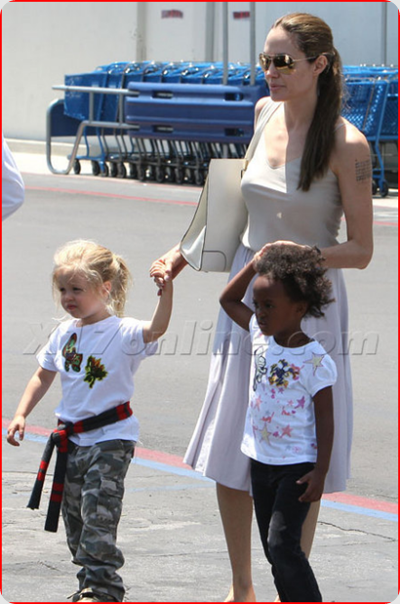 Those of you who have read this blog know from my previous posts here, here, and here, that I am not a fan of Angelina.   I was attracted to this photo because of Zahara Jolie Pitt.  She is clearly happily going on an excursion with her mother but even at her tender age, she cannot escape the typical criticism that is aimed at Black women across the globe.

I wonder what treatment that s/he would like little Zahara to get…somehow I think it involves either a hot comb or some kind of chemical straightener.  Judging from the use of the word Nappy, the above commenter seems most offended that Angelina has not seen fit to encourage the child to be ashamed of her natural hair, the way other “good little Black girls” are.

While braids and bows are certainly one way to treat hair, again why is it so unacceptable that Zahara is allowed to have her hair flow freely?

One of the first thing a little Black girl learns is that unlike White children, her hair is automatically assumed to be a problem to be managed.   Rarely are we taught to marvel at the gravity defying shapes that it can take on and before we can articulate any coherent feelings on the matter, the world has already encouraged us to internalize a negative concept of Black womanhood.

Our beauty is never assumed, in fact it is considered a work in continual progress.  The goal posts are moved to ensure that we are always chasing something that is elusive and forever unreachable.  Black women spend millions of dollars per year on our hair and it is no accident that the first Black millionaire Madame C.J. Walker sold hair care products.

Internalizing that our natural state is ugly, means that companies are able to profit from our unease and it affirms the racial hierarchy that we have normalized.   Natural hair is purposefully constructed as savage and uncouth. Nappy and or kinky hair announces to the world that one is unapologetically Black and in a society in which bodies of color are devalued, social discipline is the swift and unrelenting response.  Black women are not allowed to assert agency or demand that they be accepted for who they are.

If we were  truly valued, the ruthless profiteering from  our so-called deficiencies would have to halt and since much of western society is built upon the exploitation of bodies of color, this is simply unacceptable.  Poor little Zahara is only a child and already many are attempting to make her aware that despite her class privilege that she is still Black and therefore unworthy.

My heart aches for the little Black girls who cannot play in the snow for fear of their hair “turning back”.  I feel sadness for the girls that must restrict their movements to limit they amount they sweat, all in an effort to ensure that no naps appear.  They are slaves to their hair, just as certainly as their foremothers were forced to work in a White mans kitchen.  Submission is what our natural hair teaches us because we cannot conquer it; Black hair will always demand a return to its natural state, mirroring the ways in which we as people have always known struggle in our life.  In a world that favours long silky tresses, there is no room for hair that will not be orderly and uniform.  Whiteness as a standard leaves no room for difference.