Obama The Monkey What An Honour

It seems that a zoo in Germany decided to name its new mandrill Obama in honour of the US President. 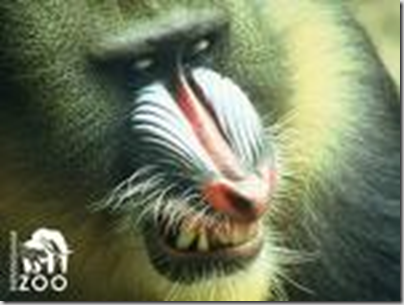 How the hell is naming a monkey after a Black Man an honour, when we consider that Blacks have historically been compared to monkeys to justify our second class citizenship globally?

The zoo said it chooses names beginning with the same letter for all newborn animals in any one year. In 2009 that letter was O and a keeper thought "Obama" would be a positive tribute to the US president.

If you buy that shit, I have some primo swampland in Florida I would like to sell you.  For the last fucking time, Black people are not God damn animals.  We are not a different species. We are human beings.

Considering Germany’s history of race relations one would think that they would be extra cautious of inferring that a person is subhuman.  It seems the desire to promote white privilege and the perfect race knows no bounds.  It wasn’t until a local Black group protested that the zoo realized the error of their ways and changed the name of the monkey from Obama to Okeke.

Though they did apologize for their actions, the original injury still stings.  Insults and barbs like this are continually aimed at Blacks.  We are repeatedly placed in a position where we must defend our human dignity and no such discipline is aimed at Whiteness.  White people are the humans in this world and this fact is reified on a daily basis.

Obama is arguably the most powerful man in the world and still yet the color of his skin is  used to render him subhuman.  If Obama cannot escape such damaging stereotypes what hope is there for those of us without his power?

When I speak about Whiteness, the label racist is continually thrown at me.  Dear White people, you don’t know what the fuck racism is.  You may understand it in the text book sense from a discrete and safe distance  but until someone spits in your face, or threatens violence against you because of your color, you have no idea of how bad it can be.  How about being declined for a promotion despite the fact that you are clearly over qualified or being told to smile because when you frown you look threatening? One of my former coworkers used to love to infer how miserable and angry I was because I refused to play mammy to his smiling white idiot.  These are just a few examples of what I have had to put up with.  There isn’t a single Black person that interacts with Whiteness that will not have a similar story to tell about the effects of racism.

I am always asked to qualify my words and say “some white people” instead of using the term Whiteness.  Look, I don’t care how anti-racist you are, you are walking around with a bag of undeserved privilege; which is part of the systemic nature of Whiteness or racism.  You may be aware enough to avoid using the term nigger or comparing Blacks to monkeys, however; because you have been steeped in a racist culture you cannot avoid taking advantage of your privilege. If you are not demeaning you are silencing, “othering” profiting, marginalizing or appropriating your way down the yellow brick road.

The post racial “theorist” (read: racist)  would have us believe that we are all equal now and that any short comings are because Blacks don’t try.  Sometimes treading water is hard enough without having to engage in a full battle with someone who is determined to maintain their privilege at all costs.   It can be particularly maddening after  taking the time to explain to someone why their language and or actions are unacceptable, only to have them declare you to sensitive, or a member of the PC police.  I call those people intentionally obtuse fuckers. Though I don’t agree with Garveys approach regarding separation of the races, there are days like this that I sure as fuck understand it.

Editors Note:  Thanks to Black Perspective for a link showing this is not the first time that Germans have decided to show their solidarity with Blacks by participating in racism.  How about a little black face to make your day?