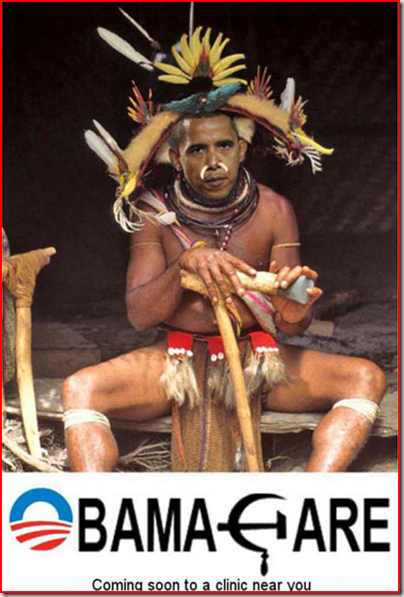 Well, the above is supposedly a hilarious take on Obama’s health care plan.  According to TPM,  Dr. David McKalip forwarded the above image to fellow members of a Google listserv affiliated with the Tea Party movement. Above it, he wrote: "Funny stuff."

Yep funny ha ha.  Do I even need to go into why the above image is not only racist but extremely damaging to African Americans?  Of course, only a backward socialist would attempt to ensure that everyone received good healthcare.  What a scary thought.  It certainly could not a plan to advance citizenry in any way.  It is further problematic that a shaman/medicine man/obiaman would be reduced in this way.  Many work with homeopathic medicine and are the keepers of cultural/”religious” history of indigenous peoples globally.

Unlike the modern medical establishment, shamans/obiamen/medicine men  of many tribes or cultures do not withhold their expertise for lack of payment.  I daresay, it is far more barbaric to deny someone healthcare over money which we have only conferred power to.  Who is more advanced than whom?  If these people had a legitimate argument, they would not feel that it is necessary to portray Obama in this way.

This is your nation drunk on white privilege or should we simply say business as usual.