The Obama’s And The Door Of No Return

As a child of the African Diaspora The Door Of No Return has much emotional meaning for me.  My ancestors were pushed through that door in chains and so began a legacy of slavery that would last for hundreds of years.  The Obamas recently visited the Slave Castle in Ghana. 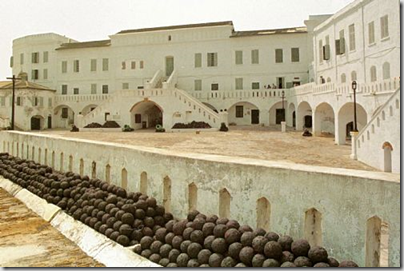 Architecturally it is quite a beautiful building.   If one did not know of its cruel history, it might even be a pleasure to behold.

Looking out over an ocean that would serve as a burial ground for millions, its 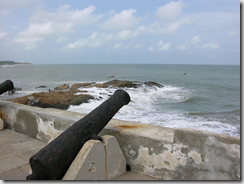 white stone belies the bloodshed that its very existence is responsible for.  There are times when I vow that one day I will return for the sake of my ancestor who never had the chance.  Perhaps they were a baby shackled with chains and therefore unaware of the cruel fate that awaited them.  Their name has been erased from history and who and what they were will never be known to me.  The name of their homeland has forever been lost to the ocean tides and I sit here today an African Canadian forever disconnected from my history.  Even writing about this loss causes my throat to sting with tears.

Many times Blacks have been told to get over slavery because it was so long ago, but to me it will forever be personal.  No, I was never a slave, fortunately I only have to live with its lasting effects but the thought of an ancestor of mine surviving on gruel, urine, menstrual blood and feces because they refused to die, is almost more than I can bear.  She or he was made of more mettle and self will than I will ever be able to marshal and I shall never disgrace their faceless memory by forgetting about the inhumanity to which they were subject. 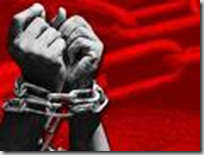 My children will never be ripped from my arms because they are considered chattel.  I will never have to apply a poultice to my sons back because he has been whipped senseless by a psychotic overseer.  My life is my own to do with as I will.  I have the freedom that they could only dream of and in my blood flows their hopes and aspirations.  It was for me, for my life that they continued on in the worst of conditions. To forget slavery or move beyond it, is to dishonour their memory and they have already given enough so that I could walk the earth today with my mind and body intact.

Those who refuse to see the seriousness of the African slave trade often try to blame it on Africans for their so-called collusion with Europeans.  Slavery in Africa was completely different than that engaged in by European powers, in fact it resembled more of what would have been considered an indentured servitude.  They had no way of knowing about the inhumane conditions to which they were subjecting people to.  There was also a power imbalance between African tribes and Europeans; in some cases it was participate or be subject to slavery yourself.

Those that want Blacks to move past slavery do so from a position of privilege.  It is not up to the oppressor to state when we, the oppressed should cease mourning for our losses.   I am tired of hearing that other groups were also

enslaved.  How many of these groups experienced slavery in the same ways as the peoples of the African Diaspora?  How many continue to be thought of as sub human?  Even sharks thought of us a chum.  They were known to follow the slave ships because it was only a matter of time before a slave was thrown over board.

As I looked at the picture of Obama at the slave castle, I knew that he could never experience in the same way that Michelle or any other child of the African Diaspora would.  His return represents that of a native son made good whereas; Michelle’s return represents that of a lost child returned home.  I have been told on many occasions that I should be thankful that an ancestor of mine was enslaved because it allowed me to be born a Canadian and to them I say, I would gladly give up that western privilege if it were to mean that no member of my family ever had to live through such a crime against humanity.  Slavery did not improve the lot for the descendants of slaves or that of the African peoples and it is dishonest to perpetuate such a myth. 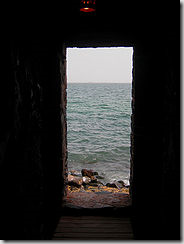 When Obama looked out over the ocean and heard the echo of the masses that had lost their lives and their freedom, on some level it must have haunted him. The slave castle will forever be a monument to the depths to which we are willing to sink to in the name of so-called profit and or advancement.  I don’t now whether or not I will ever have the courage to return and look through the doorway that lead to the death of millions but I know I shall never think of it without a feeling of loss and sorrow.