Oral Sex and Marion Barry, Washington had to know 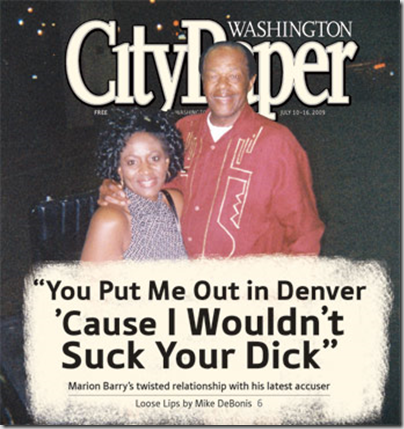 Marion Barry is no stranger to controversy and legal entanglements.  The former mayor was caught red handed in a drug scandal and was recently accused of stalking a woman.  The charges have since been dropped.

The above image appeared in the Washington City Paper and evoked charges of racism from Barry supporters.

"Some people are going to find that vulgar -- that's inevitable," Editor Erik Wemple said, taking a break from fielding at least 30 calls from irate readers. "If they find it vulgar, they can complain. It's worth putting it out there, and it's the truth. Sometimes the truth is vulgar." Wemple insists he has no second thoughts. "I haven't had any trouble sleeping because of it," he said.

Let’s be clear from the start, Barry is definitely no saint  but the language used to speak about his activities is unnecessarily inflammatory.  He is not the first politician to be involved in a sex related scandal and yet this graphic language was not used to describe their activities.

When Clinton engaged in oral sex in the white house, there were no media reports that Monica Lewinsky was sucking his dick under the desk.  “Don’t cry for me Argentina” Stanford, took off for days to engage in his affair and no such explicit language has been used, though you can bet he had more than his dick sucked by the “love of his life”.  What about Spitzer?  Did his one eyed snake just wink and smile or did the man get his rocks off with a sex trade worker?  There are ways of describing acts of sexual indiscretion that are accurate without reducing it to vulgar commentary.

Most politicians that are caught cheating on their spouses experience a fall from grace because we have moralized sexual activity, however; when a Black man engages in the same behaviour the media is quick to turn it into a circus for profit.

Black male sexuality is always constructed as hyper sexual  based in the idea that the so-called Negro is a savage animal.   Though white men certainly engage in oral sex, their participation is seen as a validation of their manhood.  Black men are understood to lack the ability to control their sexual urges and therefore to reduce Barry in this way simply supports the social myths that we already function with.

The Black penis is a problematic organ.  On one hand it is lauded for its supposed prowess and yet it is continually decried for its supposed ability to cause harm and injury to unsuspecting women.  The big black buck is designed to take what will not be wilfully given because its desire can never be denied, hence the construction of the Black male rapist.   In every construction of the Black male the understanding of the penis colors how he is viewed.

When white heterosexual men are sexual it is seen as a regular part of manhood.  A man is only disciplined for not actively seeking sex or presenting the image that sexual conquest is not foremost in his thoughts at all times.  If the Black man attempts to mimic the behaviour of heterosexual White male sexuality, he is summarily disciplined because he is understood to be competition for female bodies.

When Hugh Grant was arrested for seeking oral sex from a Black female sex trade workers between the guffaws and giggles was the defence of “boys will be boys”.  It seemed perfectly understandable that he should seek a sexual release, it was the person whom he attempted to gain it from that was the issue.  How could Grant in his right mind stray from the pure beauty of his then fiancée Elizabeth Hurley, to engage in a sexual activity with a Black whore?  Divine Brown was ridiculed and reduced to a service animal though it was Grant that initiated the sexual encounter.

It is quite natural for Erik Wemple to be comfortable with the image that he released because in the end it serves to promote and protect White male heterosexuality.  Oral sex in and of itself is not a vulgar act; it is how it is understood through the lens of race and gender that makes it problematic.  Wemple may deny the racism that occurred, however; the difference in how we speak about bodies of color versus that of White individuals speaks volumes.