Pat Buchanan on Rachel Maddow: We Need To Protect White Men From Discrimination 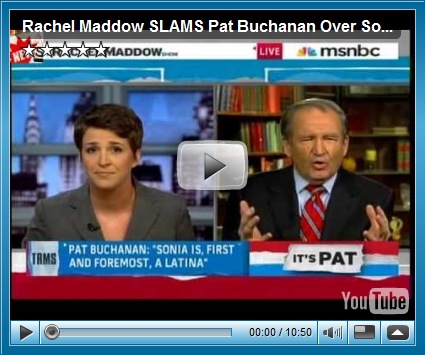 Well have you heard the word?  The white man constitutes an oppressed group socially.  108 out of 110 supreme court justices have been white however, the entrance of one “wise Latina” woman is going to ruin the system.  Damn that affirmative action.

What is interesting about this argument is that Buchanan is specifically speaking to impoverished whites with his racist ideas.   His argument assumes that white men are meant to lead and that they are being prevented from fulfilling this role because of affirmative action.   To economically disenfranchised whites this reads as, you’re situation would be different if bodies of color were not taking your places at universities and colleges.  It is the perfect example of the overvaluation of whiteness.

Class  like race is a construct and by offering bodies of color as causation for the class divide, Whites of economic privilege seek to maintain our current promotion of a hierarchy of bodies.. There is no doubt that the capitalist system is designed to  ensure that there will always be poor workers that are exploited.   What poor Whites need to realize is that relative to the body of color in the same economic class,  they will be offered more privilege, thereby; further stratifying society.   Whiteness as a reward for economic exploitation is a poor comfort when one is hungry, or unable to pay the rent.

Men like Buchanan depend on the inability of poor Whites to understand that they have more in common with a poor body of color than the most elite White male.  The point of fact is that the proletariat outnumber the bourgeoisie and it is only by perpetuating constructed divides that they are able to rule with impunity.   Each and every single time there has been a challenge to the ruling class, they have seized upon constructed difference to reaffirm their undeserved privileges.

Maddow claims that Buchanan’s rhetoric is really dated but in fact he is expressing the feelings of many today.   Liberal whites function under the belief that they have moved beyond the racism of men of Buchanan’s generation and yet in covert ways, they continue to oppress bodies of colors.  Simply because racism is not  overt, does not mean that it does not dominate our social discourse.  They may recognize the inequality in education, housing etc., but that does not stop the gentrification of traditionally Black neighbourhoods, the appropriation of our culture,  or the ironic comedy routines featuring a so-called post racial world.

It is far easier to call out a man of Buchanan’s ilk for his racism because it makes society comfortable; than to deal with the reality that the real evil of racism is in the everyday lived experience of bodies of color. Racism occurs every time a POC  goes shopping and discovers that there are no fresh vegetables to be had at their local store.  It happens when one is pulled over for driving while Black. The purposeful under education of our children ensures that race can be used as a weapon against us.  The prison industrial complex makes us modern day slaves and the media perpetuates every single negative stereotype associated with Blackness for profit.   Racism is not simply an issue of men like Pat Buchanan, it is interwoven into the very fabric of society.  Calling Pat Buchanan a racist may give one an anti-racist “feel good moment of the day,” but it is a far cry from understanding exactly how pervasive undeserved White privilege is ,or the ways in which race continues to operate as a block to the social mobility of POC.

The next time you are tempted to pull out your “I hate men like Buchanan, or I voted for Obama card”, ask yourself what that really says about your understanding of how racism truly works.   Believing that because one has an understanding of basic concepts qualifies you to take on the status of a racially informed person is a testament to your privilege.  No matter how many books, or peer reviewed articles you read, you will never have an understanding of race from the the perspective of the oppressed.  You will only have glimpsed the truth as we live it.  The decolonizing of your mind is not the work of a day, year or even decades; it is the work of a lifetime.  Just as from birth to death POC must deal with the racism of Whites, so to must Whites endeavour for a lifetime to mitigate their undeserved privilege.