The Problem With Marriage is Black People 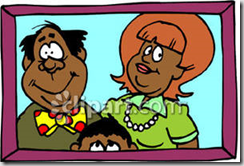 The media is forever speaking about the break down of the Black family. It came as no surprise when I came across yet another article  attempting to save this archaic patriarchal institution.     It seems that Johnny and Shanna Woodbury are experiencing problems in their thirteen year marriage, despite having acquired property, various commodities and having successful children.

"I love my husband" said Shanna Woodbury of their marriage. "But I feel so overworked and underappreciated. I work full-time like my husband, but if I don't maintain the domestic responsibilities of the house, nothing gets done. Added to that, I manage our rental properties and take care of everything for our kids, alone."

Does this sound like a familiar refrain to anyone?

"I'm faithful to my wife, I give her my whole paycheck but I work the late shift and my job is demanding. When I come home, I don't need to hear her mouth -- I just need to watch my favorite football game in peace."

Just from reading the commentaries by both husband and wife it is clear that this issue in this marriage is not race but plain old-fashioned sexism.  Women have historically been responsible for taking care of the home and child rearing. Even though today it takes two working adults to raise a family, our burden has still not been reduced. The traditional workload of a woman is often only reduced when the family in question has enough capitol to hire outside help, thereby; exploiting the labour of yet another woman.

Why does this husband believe that because he is faithful, and works long hours that he is entitled to skip domestic labour?  The answer is quite simple really – MALE PRIVILEGE.  Asking him to pull his share of the work load is understood as nagging and it is this approach that men have historically used to silence women when we complain of being overworked.

The wonderful thing about marriage is that often women acquire a new overlord and the husband a shiny new slave.  No matter how egalitarian a couple approaches their wedding, it is only a matter of time before the gender roles that we have become socialized to play become a factor.   Some women, like Jessica Valenti don’t even get to distribute the wedding invitations before gender becomes a factor in the work performed.

From the beginning, Andrew and I agreed that we would not be one of those couples in which the woman ends up doing all of the wedding-related work because she is the person who is supposed to care about it the most. No, we were going to do this fairly. He would take care of booking the music, I would handle the flowers. I would cover the invite list, he would deal with the invitations. Several months later, when I found myself up to my eyeballs in sample invitations and band websites - while Andrew read the newspaper or dallied online - I was ready to throw in the towel on so-called domestic bliss.

But black women are told that the problem is that as a community, our issues with marriage are race based and not founded in gender.  The anti-racist movement has staunchly privileged the concerns of Black men while Black women have been sent off to make coffee and bake cookies.  Any reading of the Civil Rights movement will privilege the sacrifices of Black men, while ignoring the contributions of Black women.   We have continually defended Black men when they have been assaulted by racism, only to be subjected to sexism rather than a legitimate defence of our person.

I understand that within the feminist movement we have been subjected to racism by white women but that does not mean that gender or sexism does not significantly impact our lives.  We cannot afford to privilege race over gender, as Black men are more than happy for us to do, because it allows them to center themselves in any and all conversations.  The so-called problem with Black marriage is that the institution is based in patriarchy and though Black men know what it is to be discriminated against, they have no problem oppressing Black women.  When one is understood as “other,” it should be easier to understand that oppressing another only affirms hierarchy, however; it seems that for Black men, the opportunity to express power coercively is an addictive drug.

Though this post has focused on sexism from the point of view of Black marriage, I feel that it is important to note that the issues raised are not specific to the Black community.  What we should take away from the example that the Woodbury’s provided, is that we should not have to play the role of “strong black woman” and we do so not only because society has decided that Black women are worthless but because the men that are supposed to be our greatest support have no problem throwing us to the wolves when it is convenient.  Just because it seems that someone should be your natural ally does not necessarily make it so.