I use the phrase, “I loves me some,” to speak about a person I either really like or have a large amount of respect for.  For instance I would say, “I loves me some Queen Latifah or I loves me some Flo Jo” In the right company, a good “I loves me some” session can on on for quite some time.  I was recently engaged in a session with a friend of mine when I chose…… 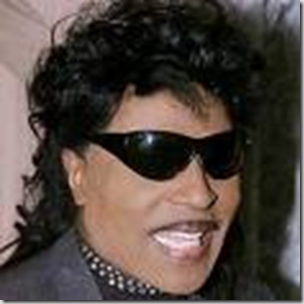 That’s right, I loves me some Little Richard….Shut up!  Not only was Richard a ground breaking musician for his time, the man is Hi-la-ri-ous.  UH HUH.  Little Richard is so worth an I loves me some….SHUT UP! Okay he was stolen from an ain’t nobody ever gave the man a dime…UH HUH….

The friend in question shall remain nameless only because I think that denying Little Richard his I loves me some status is beyond a Sunday Shame.  She had the nerve to call the man fugly and pick at his addiction to the soul glo jerri curl. Talk about some sacrilegious shit.   You know what, I change my mind, she can own this one….ALLISON MCCARTHY…of course you know the fabulous Monica of TransGriot agrees with me

Well readers, I am counting on you to restore Little Richard….weigh in and let me  know if I have earned a Sunday shame by giving Little Richard the I loves me some status and feel free to share some of your favs  I love me somes in the comment section.