We Loved Michael But The World Goes On 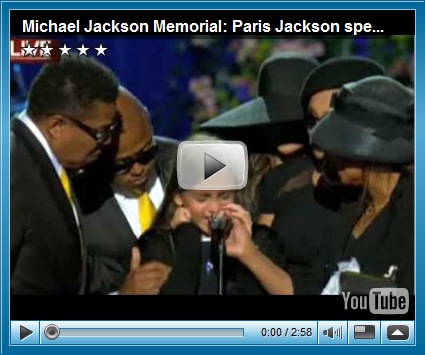 Even the most cold hearted cynic had to have been moved watching Paris Jackson say goodbye to her father at yesterdays memorial.  It was one of the few occasions since his death that we got to see the human connection, instead of the celebrity oddity that he had become.

Like many across the globe, I tuned in to watch the memorial.  It was a beautiful tribute to the man and his music, even if we did have to tolerate positive references to his abusive father Joe Jackson.  I firmly believe that the only thing that the man is mourning is the loss of his largest meal ticket.

At this point, I don’t feel that it is disrespectful to say that it is time for the world to move on.  We have played his music, watched his videos and laughed at the way we tried to dance like Mike.   To go any further would be to create a circus and in fact we are already verging on this.

The news this morning continued to show clips from his memorial, just in case you somehow missed the MASSIVE coverage from yesterday.  As great as MJ was, he was only one man and there are issues in this world that require attention.  Much of this mourning reveals the over obsession with celebrity, rather than focusing on someone’s good work.  This is not to say that his charitable donations are not noteworthy, however I cannot help but think of the contrast between his memorial and the funeral of Mother Teresa a little over a decade ago.

If we really want to celebrate the fact that Michael dreamed about a better world, perhaps we should get to the work of creating one instead of continuing on with the media circus.  He reminded us that there  were “kids in the street without enough to eat,” and if he could not be blind to their weeping then in his name neither should we.  “Heal the world make it a better place, for you and for me and the entire human race.”  He has passed us a torch and what remains to be seen, is if we have the heart to pick it up.