What Becomes of Michael Jackson’s Children? 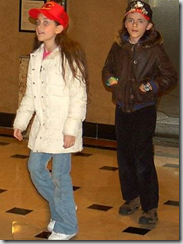 Prior to the revelation of a will, Kathryn and Joe Jackson filed for custody of Michael Jacksons three children. When the will was filed, it was discovered that Michael Jackson directed his mother Kathryn to take custody of his children. The will further stated that were she to predecease him or be unable to fulfill the role of guardian, that he wished his children to be raised by his lifelong friend Diana Ross. Despite being one of nine children, it is particularly telling that he made no such endorsement of either his siblings or his father Joe Jackson.

The Jacksons were the little family from Indiana that rose from obscurity under the steel will of Joe Jackson. Today we are in the awe of the musical legacy left behind by their greatest star – Michael. In this time of mourning we are left to consider the cost of the gift that he left us with.

Michael paid for celebrity by sacrificing his childhood. He put his feelings to music in the song “Childhood”:

People say I’m not okay
‘Cause I love such elementary things…
It’s been my fate to compensate,
for the Childhood
I’ve never known…

Have you seen my Childhood?
I’m searching for that wonder in my youth
Like pirates in adventurous dreams,
Of conquest and kings on the throne…

Before you judge me, try hard to love me,
Look within your heart then ask,
Have you seen my Childhood?

The loss of his childhood would haunt Michel to his dying day. It was a sacrifice that his father Joe Jackson felt was necessary. Joe has enjoyed the role of patriarch and the second-hand fame he has achieved through his children. When BET held a tribute to Michael, Joe was the only family member in attendance.

Joe Jackson has taken every opportunity to raise his public status. When asked what the next step was by Don Lemon of CNN on the red carpet, he immediately began to speak about a record label he was attempting to promote, rather than discussing funeral plans for his son or the future of his grandchildren. He claims that he took the opportunity to promote his record company because that is what Michael would have wanted him to do. He further stated that he was crying on the inside. Each person deals with grief differently; however, it is quite incomprehensible that a loving parent would so easily cast aside the death of a child to promote a business venture.

Michael was a success in spite of Joe and not because of him. When one examines the life that Michael led, it is clear that it was filled with issues stemming from a very troubled childhood. What is ‘Neverland” but a palace dedicated to loss and suffering in the guise of play and whimsy? If Joe’s so-called methods were great, why did Michael feel the need to dedicate millions of dollars to attempting to escape his father? Why did Michael state that even as an adult the sight of Joe was enough to make him vomit?