15 Year Old Stripping But Story Is About Grandma Attacking Camera 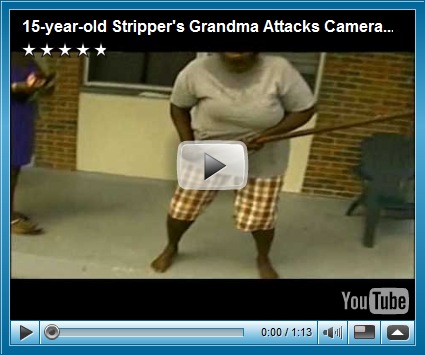 A mother discovers that her 15 year old girl is stripping and she calls the police.  Obviously this is illegal and the child is being exploited.  This is further compounded by the fact that apparently the girl has not been in school since the seventh grade.   Clearly there are issues with neglect going on.

When the news decided to report on this story, they went to the child's home and were greeted unceremoniously by her grandmother.  They did not ask permission to interview her and just stuck the camera in her face.  She went on the attack and chased them off of her property, with what looks to be either a rake or a hoe.

My question is, why is the grandmother the highlight of this story?  The media constantly likes to present the image of Black people acting up and crazy.  They were on this woman’s  property, filming her, without her consent. You will note how one reporter continued to attempt to question her, when it is clear that she wanted them gone.  It is interesting that when they filmed the strip club, that they made sure to stay off of the property.  It seems the rights of businesses, are easier to respect than the rights of people.

The heart of this story is not that a grandmother lost her temper.  Why would they even knock on this families door?  Isn’t the child in a serious enough condition, without revealing her identity through her family to the neighbourhood and world at large?  The issue should be that a fifteen year old girl was working at a strip club for quite some time.  Why aren’t the police monitoring these places to ensure that they are in full compliance with the law? How many times do we have to read about young girls working in strip clubs, to know that owners are not going to be responsible about who they hire?

She is a child and it is very likely that ensconced in a strip club, that her behaviour will escalate. Why even talk about the exploitation of young girls, or the possibility that stripping could lead to prostitution and drug abuse, when we can show an older Black woman losing her mind on television for entertainment?   Yep, that’s pure entertainment for you and that is what the news about these days.  Asking constructive questions just seems to be a waste of time, when Blacks can be portrayed as cooning around.