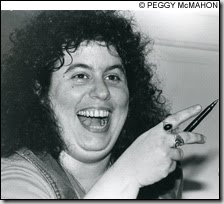 Photo from The Boston Phoenix.


There has been a lot of heated discussion among Second-Wave radical feminists, concerning when transphobic theory "took over" the discourse. Women who claim to be of the hard-core Andrea Dworkin school of radical feminism, steadfastly adhere to the concept that trans people are not the gender they say they are and will not use preferred pronouns; some go so far as to edit comments on their blogs and change the pronouns, for example. Many of these Second-Wavers believe it is reactionary to "endorse" (for lack of a better word) the gender identities of trans folks. Much talk about the "gender binary" (male/female, historically constructed as mirror images, opposites, yin and yang) and how transgenderism "upholds" this binary, etc etc etc.

For many of these feminists, the late Andrea Dworkin is something of a patron saint. One well-known radfem uses a quote from Dworkin on her blog, to let it be known she is a "take no prisoners" sorta gal. I have read many, many quotes by Dworkin on Second-Wave radical feminist blogs.

But it is telling that they carefully leave out the quote(s) below, even though they claim to have all of her books.

In conversations with trans feminists, I have continually assured them that many Second-Wave radical feminists were NOT transphobic, and actually empathetic to trans people. However, I've had trouble finding any proof, other than my own memory and a few trans friends of Kate Millett's. Depressingly, the more I searched, I found much more proof that radical feminists were mean and vicious (i.e. Robin Morgan's lynch-mob rhetoric concerning trans women in her book titled Going Too Far). The Janice Raymond/Robin Morgan/Mary Daly faction seems to have "won" the transgender round of radical feminist theory, by default.

And so, it brings me great pleasure, after a very long search, to finally have the following quote IN MY HAND, not just from memory. Thank God for Amazon.com and the used books option, since this is long out of print.

I find it interesting that Morgan did not provide a blurb, since she and Dworkin were good friends. (Was this passage the reason?)

Note: In the 70s, at the time of this writing, the accepted terms were "transsexual" (instead of transgender) and "hermaphrodite" (instead of intersex)--and these are the terms Dworkin uses.

First, Dworkin believed that the human race is multi-sexual, and to maintain patriarchy, these multiple genders must be "contained" within the two-gender binary. Transgendered people, then, are the people who have fallen through the cracks, so to speak, who do not fit into this rigid system.

These excerpts are all from the suitably Dworkinesque-titled chapter Androgyny: Androgyny, Fucking and Community:

Hormone and chromosome research, attempts to develop new means of human reproduction (life created in, or considerably supported by, the scientist's laboratory), work with transsexuals, and studies of formation of gender identity in children provide basic information which challenges the notion that there are two discrete biological sexes. That information threatens to transform the traditional biology of sex difference into the radical biology of sex similarity. That is not to say there is one sex, but that there are many. The evidence which is germane here is simple. The words "male" and "female," "man" and "woman," are used only because as yet there are no others.

She discusses the facts that there are intersexed people, hairy women, feminine men, indistinct genitalia, etc.

We can presume then that there is a great deal about human sexuality to be discovered, and that our notion of two discrete biological sexes cannot remain intact. (Note: The following sentence is underlined repeatedly in my used copy.) We can presume then that we will discover cross-sexed phenomena in proportion to our ability to see them.
In addition, we can account for the relative rarity of hermaphrodites in the general population, for the consistency of male-female somatotypes that we do find, and for the relative rarity of cross-sexed characteristics in the general population (though they occur with more frequency than we are now willing to imagine) by recognizing that there is a process of cultural selection which, for people, supersedes natural selection in importance. Cultural selection, as opposed to natural selection, does not necessarily serve to improve the species or to ensure survival. It does necessarily serve to uphold cultural norms and to ensure that deviant somatotypes and cross-sexed characteristics are systematically bred out of the population.

Later in this section, she makes a statement in italics, for emphasis:

We are, clearly, a multi-sexed species which has its sexuality spread along a vast fluid continuum where the elements called male and female are not discrete.

And then, we get to the section titled Transsexuality, which she starts off by quoting "a transsexual friend":

How can I really care if we win "the Revolution"? Either way, any way, there will be no place for me.

Keeping in mind there were far fewer uncloseted transgendered people in the 70s, I find the following paragraphs to be pretty radical and trans-positive stuff:

Transsexuality is currently considered a gender disorder, that is, a person learns a gender role which contradicts his/her visible sex. It is a "disease" with a cure: a sex-change operation will change the person's visible sex and make it consonant with the person's felt identity.
Since we know very little about sex identity, and since psychiatrists are committed to the propagation of the cultural structure as it is, it would be premature and not very intelligent to accept the psychiatric judgement that transsexuality is caused by a faulty socialization. More probably, transsexuality is caused by a faulty society. Transsexuality can be defined as one particular formation of our general multisexuality which is unable to achieve its natural development because of extremely adverse social conditions.
There is no doubt that in the culture of male-female discreteness, transsexuality is a disaster for the individual transsexual. Every transsexual, white, black, man, woman, rich, poor, is in a state of primary emergency as a transsexual. There are 3 crucial points here.
One, every transsexual has the right to survival on his/her own terms. That means every transsexual is entitled to a sex-change operation, and it should be provided by the community as one of its functions. This is an emergency measure for an emergency condition.
Two, by changing our premises about men and women, role-playing and polarity, the social situation of transsexuals will be transformed, and transsexuals will be integrated into community, no longer persecuted and despised.
Three, community built on androgynous identity will mean the end of transsexuality as we know it. Either the transsexual will be able to expand his/her sexuality into a fluid androgyny, or, as roles disppear, the phenomenon of transsexuality will disappear and that energy will be transformed into new modes of sexual identity and behavior. 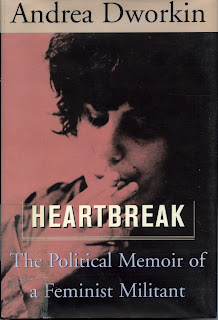 I have noticed that many radical feminists latch on to her third point, overlooking the first two. Further, they make the third point prescriptive, rather than descriptive. Dworkin obviously meant that transgenderism will "disappear" after her androgynous feminist revolution, not that we should make actual trans people disappear RIGHT NOW. I think she is very clear on that.

When trans feminists initially read these words in the 70s, it is understandable that they felt welcome in the feminist movement. When they attempted to take their place among us Second-Wavers, they were rejected, trashed, outed, and accused of being "rapists" simply for being trans persons. Feminists who loved what Andrea wrote about pornography (including her legal activism), seemed to overlook what she said about trans people, and/or assume she had the views of Morgan, Daly, Sheila Jeffreys, et. al.

No.
Let the record show, once and for all, that she did not.
~*~
Everyone is welcome to discuss this post, regardless of your views. But the ground rules are: RESPECT FOR EVERYONE, including preferred pronouns. No trans-baiting and yes, YOU KNOW WHAT I MEAN.

Make Andrea proud, and show some empathy for those people in a primary emergency within patriarchy.
Thank you.