Spanish toy makers have introduced the world to its first breast feeding doll.  A halter top has been created with two strategic flowers that act as nipples.  When the doll is pressed against the flowers it makes a sucking noise.  Predictably the forces of idiocy (read: Fox News) have issues with the doll. 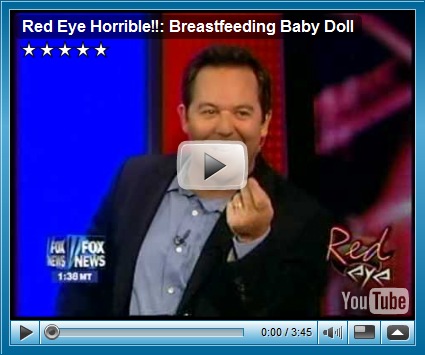 PAV: The idea is to show that I mean most babies come with bottles and their trying to coax people to do the breast feeding and trying to convince people that its natural but sex is natural to. Should we give baby boys..this is baby glutton. It’s just I mean breasts serve three purposes: they entice a man to sleep with you, they feed the babies that result from that and then they just prove Newtons law of gravity but in any case little girls don’t have breasts because they are not supposed to be thinking of any of those things yet. They’re not just short adults, they’re babies, they’re kids.

Thaddeus McCootter: No, what I think we should really do is affirm the supremacy of G.I. Joe as an American icon, so that this type of thing.. When you ah abandon the concept of a G.I. Joe and fighting for freedom and defending liberty, you wind up with a breastfeeding Spanish doll.

Of course, supporting a doll that glorifies violence is by far more suitable than teaching children that breastfeeding is a natural part of life.  Somehow, baby gluttony is abhorrent when we know that the true nature of society is the promotion of truth democracy and the American way, delivered at the end of an AK-47. 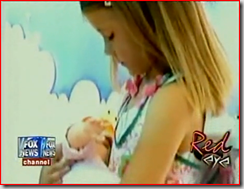 The issue with this doll is not that it teaches little girls to breastfeed, in my mind the problem is that it once again affirms the indoctrination of mothering as a necessary act for all that are born cisgendered and female.  We give little girls dolls to entice them to nurture because we have determined that socially this is the roll that women are meant to play, whether or not they have the desire to 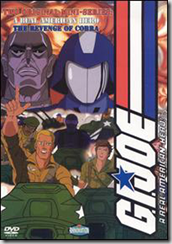 reproduce.  If this were not the case, why would don’t we expend the same amount of time and energy encouraging a similar pattern of behaviour in young boys.  We only see fit to give boys dolls when they  represent a violent form of masculinity because culturally men are constructed as assertive to the point of aggressive and violent in the face of any threat to the constructed model of masculinity.

Gender is as constructed as any other identity that we are born into.  From the moment a child opens their eyes and the doctor declares it male or female, we teach hir lessons that affirm certain behaviour patterns as normal.  Why do we feel the need to dress a child in blue or pink to indicate sex, even though at a young age such divisions are meaningless to the baby in question? Why do many parents experience consternation if their male child chooses to play dress up, or enjoys playing house, and tea party, though we know that a growing imagination is an essential part of improving the cognitive process?

By the time a child enters school, there is no doubt that they will have already learned whether or not they are to pick up the skipping rope or the football due to parental discipline and yet we act like children are just born knowing how to behave according to gender.  If we have to teach a child to walk, talk, read and write, why is it so hard to own the fact that we also teach gender performance? The bottom line is that we wish to theorize that these behaviours are natural because it serves patriarchal purposes.  If a woman is always and forever destined to nurture and mother, then she is a slave to her reproductive organs in a way that man never can or will be.