This is a guest post by Loryn of black girl blogging 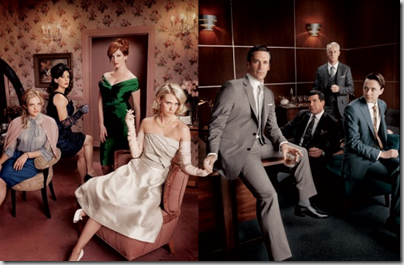 As a pretty big Mad Men fan, I was so excited about last night’s Season 3 premiere. Not only did I want to know how the rest of the story unfolded but part of me hoped that maybe, just maybe, we’ll see more than a passing glance at a Black character on the show or the mention of race as an afterthought. Every time I watched the show, I couldn’t help but think, “gotdamnit! When are they going to say anything about race or Blackness! It’s the sixties for cryin’ out loud!”

It wasn’t until I read Ta-Nehisi Coates’ recent post that I realized that it the absence of Black people is precisely what we love about the show as it explores what white privilege and masculinity is—and in the case of Mad Men it does mean that people of color are rendered invisible.

I actually think it’s a beautiful, lovely, incredibly powerful omission. Mad Men is a show told from the perspective of a particular world. The people in that world barely see black people. They’re there all the time–Hollis in the elevator, women working in the powder-room, the Draper’s maid, the janitors, the black guy hired at Leo Burnett–but they’re never quite seen. I think this is an incredible statement on how privilege, at its most insidious, really works.

It’s been argued that the absence of people of color is a romantic view of “the good ol’ days”, but I beg to differ. The fact that Black people are so absent and silent in the face of white privilege is exactly a commentary on race in the 60s, especially as there were already so few Black people who lived in worked in the type of environment that Don Draper and company were so accustomed to. There are several female writers on the Mad Men team, which is why the gender commentary is so on point, but I often have to wonder what would have happened on the show if there were people of color on that team. Would we be more present? Or would things remain the same?