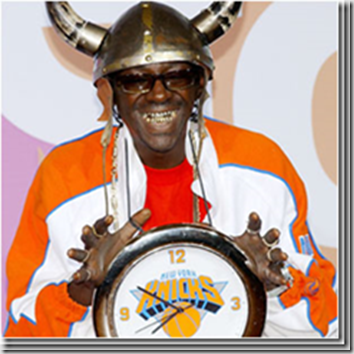 Yep, in another edition of coonery central, I bring you the words of Chris Broughton, the man that brought an AR-15 to an Obama healthcare town hall meeting.

Chris Broughton, the man who brought an AR-15 rifle and a handgun to an Arizona Obama rally earlier this month, says he "concurs" with his fundamentalist pastor's prayer for President Obama "to die and go to hell."

And in an interview with a local TV station, pastor Steven Anderson himself elaborated on his statement to TPMmuckraker that he would prefer Obama to die of natural causes so "he's not some martyr."

"I don't want him to be a martyr, we don't need another holiday. I'd like to see him die, like Ted Kennedy, of brain cancer," Anderson now says.

In an interview with ABC 15 outside the storefront Faithful Word Baptist Church in Tempe, Broughton said of Anderson's controversial August 16 "Why I Hate Barack Obama" sermon: "I concur, I think we'd be better off if God would send [Obama] where he's going now instead of later. [Obama] is destroying our country."

And when a reporter followed up with, "you're not advocating violence against the president?" Broughton, who has previously said his weapons are for defense, says "I'm not going to answer that question directly."

"I don't care how God does it, I'm not going into further detail than that," Broughton says. "It would be better now than later." 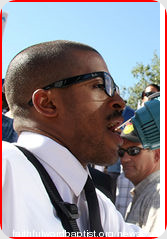 Will the republican party every run out of uncle toms to sell their hateful message?  Honestly, it is one thing to disagree with the President and quite another to openly advocate for his death.

Who the hell does this fool think he is benefitting by protesting socialized medicine to begin with?  The majority of those dying before their time are POC because of a lack of access to good, reliable healthcare.  Dear God, open your damn eyes and realize that those that are spearheading anti-health care reform are largely White men of privilege.  Hello McFly…they have healthcare.  When you are dead in your grave, after saying your millionth yes suh maasuh, they are just going to move onto the next house slave to promote their message.  These people don’t give a damn about Black people or any people of color for that matter.

This man is careful to state that he is not advocating violence against Obama to avoid legal trouble but the line is so fine, I do believe he should be investigated.  I don’t even know how he can look himself in the mirror, after praying for the death of the first African American president.  Even if you disagree with his policies, how can you possibly ignore what Obama represents to Blacks?  It was a watershed moment, that represented the hopes and dreams of so many.  Dr. King and so many others gave their lives, so that there could be a Black man elected to the highest office and this fool is sitting there wishing for his death.  I am just gonna say it plain and simple, Chris Broughton needs to get on the bus, ‘cause with Black people like him, who needs the KKK to spread the hate.