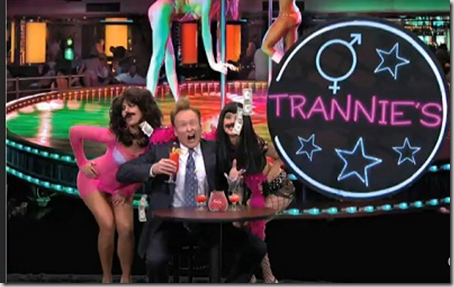 The above image is from Conan’s Tabloid Moment.  In last Thursday's segment, he sat at a strip bar wondering how to make the moment more embarrassing, then the sign flashed “Trannie’s” and two female strippers arrive and slapped moustaches on their faces.  GLAAD has already reached out to NBC on this issue, however; in a case of transmisogny this vicious we should all be enraged.

Having two cisgendered women slap moustaches on themselves and pretend to be trans women, posits that trans women are not really women.  No trans woman would present themselves post transition this way and this little snippet makes a mockery of their existence.  It is further disgusting that not only did he find it appropriate to use a hateful slur, he displayed it in neon lights.

It is troubling that a cisgendered man with a trans woman is understood as something embarrassing. Conan made a point of suggesting that the supposed embarrassment was escalated after the trans women arrive on the scene.  Earlier, I referred to this as transmisogny and that is because not only is this attack based in transphobia, it is specifically aimed at  trans women.  Much of the hatred that is openly projected at the trans community, is aimed specifically at trans women.  Socially we can understand why a woman would want to be a man because of male privilege but it is inconceivable to many, that a person would choose to give up male privilege to live life as a woman.  These attacks are a form of discipline and punishment.

Many trans women find that after transition they are unable to function in the job market akin to their previous identities.  So terrible is the loss of privilege, many forgo transition until later in life.  Trans women are hated not just because they are trans but because of a culture of misogyny.

When feminists or womanists refuse to take up the struggle and fight for the right of trans women, they are actively supporting misogyny.  Many of the taunts that are aimed at cisgendered women, are also aimed at trans women.  We are one in the battle against patriarchy and by seeking to institute some sort of artificial division, we perpetuate the idea of womanhood as less than and somehow deficient.

Conan uses comedy as a vehicle of “othering”.  Only over sensitive PC police, or trans women that can’t take a joke are understood to find this type diminishment  alarming. Privilege allows Conan to tell this kind of “joke” because it is not about men like him being reduced and it further reaffirms the social power structure. How many people sat in the audience and laughed at this debasement, while not consciously acknowledging the fact that it was an expression of coercive power?  Very few would agree to be the equal of trans woman because socially they are understood to be pariahs and yet their humanity is no less valid than anyone else.

Conan may find it funny to demean others for a laugh because he loses nothing from his behaviour.  At the end of the day he will remain an over privileged heterosexual, able bodied, white male, of class privilege.  The world was designed just for people like him.  Those of you who don’t fit into that small category, should give a moments pause before railing about over sensitivity or the unnaturalness of transgendered bodies to consider that most of us will negotiate one or possibly multiple forms of oppression.  The person that you laugh at today, could be giggling at your expense tomorrow because all isms are interrelated.  If for no other reason than believing that everyone exists with some form of human dignity,  this kind of behaviour must end.