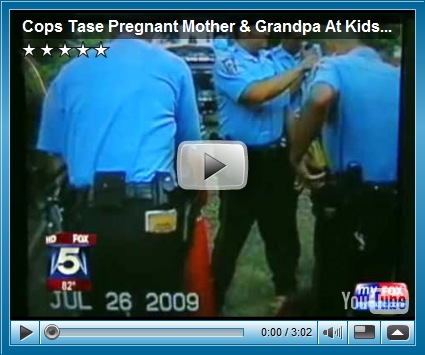 There are those that always defend the police no matter what action they take and this is largely because the people  that must deal with brutality are bodies of color.  Justice is not colorblind and those that believe that myth have never been on the wrong side of a billy club.  I have repeatedly stated that officer friendly is not so friendly, only to be told that people of color have a prejudice against cops.  Well, let me tell you what I have a prejudice against, Black grandmothers being shot at point blank range, Black men being killed in subways stations, or outside of clubs the night before their wedding day, and pregnant women being tased for trying to help an old man.

I am sick and tired of reading either out right lies in police reports or justifications that amount to informing people of color that our bodies were created to be abused.  We spend a lot of time talking about gangs but the one gang many are reluctant to identify all wear blue.  We may not perceive  the police force as gangbangers, but if one really thinks about it, the comparison is quite apt.  They look out for each other to the point of breaking the law, they patrol neighbourhoods making sure their presence is felt, they inspire fear, they hide behind the code of silence i.e. the blue wall, they resort to violence to demand respect,  engage in creative writing on police reports to hide their crimes, and some have been known to extort money from citizens.

Officer friendly lives in suburban gated communities that are largely populated by white people but he makes certain to send his brother beat down Billy to Harlem, Compton, East L.A.  and anywhere  else where the majority of the residents are of color.  There will be those that will say that not all police officers are bad and this is true, however enough of them are to make life hell for people of color. What good reason did this cop have to tase a pregnant woman in the back?  How could she be resisting arrest if she was tased from behind?  They don’t even bother to be creative in their lies because they know all to well while Whiteness is in power it has a vested interest in keeping bodies of color under control and docile.  Show me a Black man that is not worried when he is pulled over and I’ll show you a fool.

Giving these armed thugs tasers was one of the worst things we could have done.  It is justified behind the myth that tasers are non lethal and yet scores of people have died as a result of being tased.  Even when death does not occur the majority of those that have been tased are people of color….ooops doesn’t that conflict with the whole justice is blind shtick? Considering that these supposedly good men and women have been trained to handle situations that escalate into violence, how is it that the taser has come to be the quick solution, rather than conversation? Oh yeah silly me, they’re only tasing bodies of color, so why should anyone important care?  This is not about bodies of color being to sensitive or hiding in an ideological corner, this is about generations of state sanctioned violence directed against us.  How could anyone possibly believe that racism is not systemic?