Costco and The Lil’ Monkey Doll 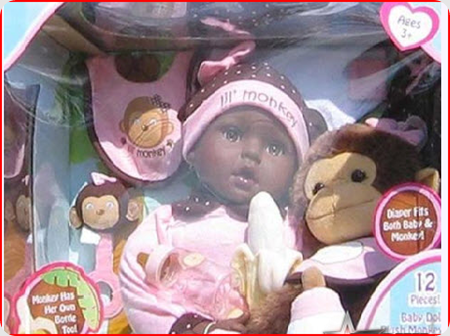 Who wouldn’t want to buy a Black doll named little monkey for their little girl?  What better way to reinforce the idea that people of colour are less than, than  by giving a child a toy that plays upon the racialized meme that we are animals.

If this doll in and of itself, does not read as racist, perhaps placed alongside the White doll pretty baby, it will become obvious. 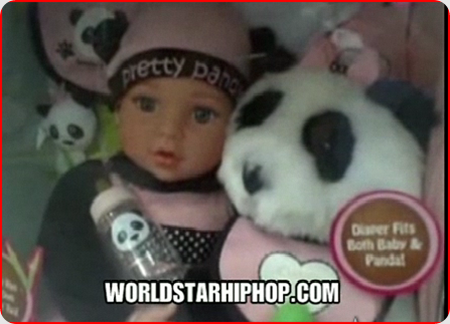 Of course Costco did not realize that these dolls were racist, until it began to receive complaints from customers.  They have removed the dolls from the shelves and issued an apology.  A link to a video regarding this story can be found here.

How many times have we seen Whiteness act in racist ways only to offer a ridiculous apology? The damage has already done and no words will soothe the pain that has been inflicted.  Whether it is watermelons on the white house lawn, or the above dolls, apologizing after committing what is clearly a purposeful ,racist act is meaningless. Ignorance is no defence when a child of color must learn from birth to negotiate Whiteness.  Ignorance is purposeful and is a result of unacknowledged, undeserved privilege. Simply learning 101 facts, in anti-racist theory, is not difficult if one chooses to learn.

Black women in particular are constructed as the ultimate anti-woman.  Young girls often face troubling self esteem issues, as they confront the idea that White womanhood, is understood as the only legitimate form of femininity.  As they struggle to find their identity and deal with racism, dolls like this can be particularly damaging.   Isn’t it enough that our daughters don’t see themselves reflected in children's programming, movies, or books, without placing more negative images in front of them to internalize?

Whiteness is purposeful and each day it acts in its own defence. Despite the great gap in power, Whiteness seeks to ensure not only the maintenance of the divide but that it increases with each passing day.  I am not comforted by shrill denials, or fauxgressive thought;  the reality of living as a racialized body in a White world means a life of continual “othering”.

There are those that feel that we should not speak about race.  They are content to let objects like this doll exist without commentary because race is too difficult, personal, political, or controversial.  That is an easy assertion coming from a body that will never be compared to an animal or called nigger.  Avoiding the issue or declaring the world post racial, will not erase the bifurcation between White and Black, it will only cement Whiteness as the norm and therefore good.

This doll hurts my heart because it stands not only as a reminder of the racist state in which we live but the ways in which children of color must sacrifice their childhood by learning all to quickly how little they are valued.  Our children have been ripped from our arms, systemically undereducated, raped and murder.  In every possible way, they have been and continue to be violated.  To Costco I say thanks but no thanks, your apology is of little comfort.

(Editors Note: I incorrectly named the White doll pretty baby when it is in fact pretty panda)